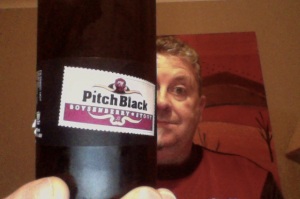 I know right, a Boysenberry Stout!!! Brewed by Invercargill Brewery in the style of a…. Stout, and they’re from Invercargill, New Zealand, served up as a 330ml 5% ABV

This member of the Pitch Black stout family starts rich and finishes dry. Prior to fermentation we added the equivalent of 15 percent boysenberry juice which blends with the familiar accents of chocolate and roast coffee in the brewer’s version of chocolate beery ripple

They said….. and it delivers a pretty strong and very pleasing aroma, and a fine mocha coloured creamy head. So far so good. The Aroma appears to be fruit and or chocolate, or chocolate fruit.

Oh and then there’s a shocker of a taste. Carbonation burst and a melange of flavours of neither one thing or another, but a smokey after-taste. I don’t get more than an acid fruit indication, I have no idea what the fruit would be other then it’s a fruit. I get, weirdly, biscuit as an aroma, biscuit as in a rich tea biscuit. Odddly odd.  I think it’d like to be chocolate biscuit.

Cutting to an early chase then because this might should have been more a grand-stand beer, in my mind, that it actually is, a closer, the finisher, The night-cap. All these things in my mind that are never going to happen.

The pdubyah-o-meter flickers briefly to 6 from 10, and that would be a push, it’s a bit underwhelming and a bit drab. And that annoys me.