From the brewery with some of the best label artwork, Panhead – Black Sabbath.

Brewed by Panhead Custom Ales  in the style that is of  Barley Wine and they are Upper Hutt, New Zealand

There’s an elemental darkness at the hear of this massive Black Barley and Rye Wine. You can feel it wafting rich, dark fruit up from the glass with powerful overtones of tobacco and bourbon. Like its stable mate The Vandal, Black Sabbath is inspired by a famous John Reid-built kiwi hot rod, but at the same time we think its strength and uncompromising character also pay considerable tribute to the rock and roll originators of the name.

I like beer where I learn something, and I did about “Black Sabbath” as I did about the “Vandal” which is very nice beer from Panhead.

Lets get the motor running. (clearly not a Black Sabbath fan)

I remember from when I was 18 that when we got to drink on Sunday lunchtime- opening hours being 12pm to 2pm before they closed for 3 hours, (it was a long time ago) that the finisher was Guinness and Barley Wine. as this was guaranteed an afternoon nap after the roast meal and the football highlights on TV. “The Big Match” One long game and highlights of two others….

This is a much yeastier aroma on opening, but it’s not sour.

Cricky this pours thick like molasses, dark and impenetrable, not noisy and seems to lack carbonation, the thin head dies and leaves.  Black as Sabbath…. (see whatI did there) 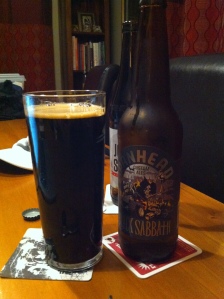 I’m not sure when I had a beer like this last, it’s a real soup of a beer, lots of intense and yet understated layers in this. It’s like somehow it’s had water taken from it.

The pdubyah-o-meter rates this as 8 a of its things from the thing. I like a thick and inclusive beer, but his might just be over played, and somehow for me becomes a bit exclusive and standoffish. It is lovely though, fruity, burnt malts, deep tastes, full mouthfeel, and a reasonable finish, it is though hard yakka and bit hard to plough though.

Related articles – see what I did here 🙂