Dial it back a notch, or up a notch with a Hop Federation American Brown Ale, possibly the oldest beer in the fridge that’s not on the save to a really rainy day list

Brewed by Hop Federation Brewery in that style is of  Brown Ale and they are in the romantically named Riwaka, New Zealand 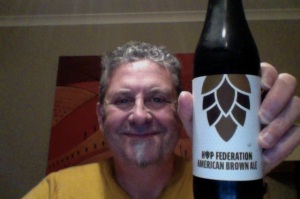 Our American Brown Ale is rich and dark with a delicious chocolate caramel aroma. Subtle chocolate and citrus flavours on the palate follow through to a moderate bitterness on the finish.

Dark in colour but lighter in style and with modest alcohol, our American Brown Ale is brimming with comforting aromas and flavours.

At first, it’s redolent with chocolate and coffee, following through with a full malty flavor that’s derived from a carefully managed combination of six varieties of Gladfield Canterbury malts. An edge of dark-cocoa bitterness is nicely balanced by a hint of cherries, giving it the warmth and richness of a dark beer in a light to medium body.

Based on a style of ale that grew from English roots to flourish in America in the late twentieth century, our American Brown Ale takes the tradition a step further with an Antipodean touch.

Got to be good for you. 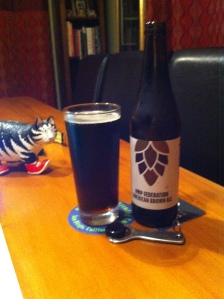 Pour appears to be light golden but it appears a rich chestnut brown in the glass with a thin and thin head that dissipated but is consistent over the glass.

Lots of hop aroma and it only had two in there:  Motueka and Nelson Sauvin, I could guess 50/50 that the stronger is… Nelson Sauvin.

That’s a bit alright, nice malt warmth in this, lots of carbonation but not overly so head remains creamy looking, that’s quite a trick.

Nice easy drinking beer then, slightly one note with the hops, but it drinks all will a lot of taste and decent length and lingering mouth taste.  Looks like what you might think a brown ale should look and taste like.

Not sure I got or get any of the advertised chocolate cocoa caramel things that are said to be a part of this, but let me say that I’m just enjoying it for what it is, a moderately bitter beer with a decent look in the glass, that gives you a bit of bitterness and a nice drink and a decent linger in the mouth, what more can you ask of a beer?

Quaffable. I’d happy sit with a few of these and tell stories. Doesn’t need a lot of other things to temper it down or up or offset it by way of snacks or food, it’s just beer to drink .

The pdubyah-o-meter rates this as 8 a of its things from the thing. It ticks a lot of the boxes, looks good, sits well, tastes nice and doesn’t make you frown or pick between competing tastes. Smells like you expect a Ale to smell and continues to do so as you drink it.

I drank this, and in agreement with MrsPhil, was listening to Lee Fields and Expressions! How could I not have played this in so long. This is “Faithful Man” from the lovely album of the same name.

Elmer “Lee” Fields is an American soul artist born in 1951 in North Carolina, sometimes nicknamed “Little JB” for his physical and vocal resemblance with James Brown