Beer with long comedy name time – Boundary Road Arabica Dabra Coffee Oatmeal Stout. A gift from my wife for something or other.  She’s frugal so this wouldn’t have been expensive. Bless.

Not, in my opinion, strictly a ‘craft’ beer but that’s a whole different debate This is brewed by Independent Breweries NZ (Boundary Road) this on in the style of a  Stout and they are based in Papakura, Auckland, New Zealand. 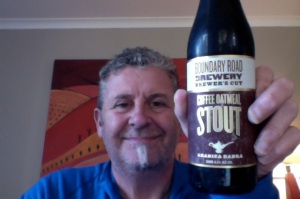 Arabica is one of the most popular types of coffee. Not only does it have a delicious, invigorating taste, but it also helps you avoid boring things, like sleeping. We like it so much we’ve added it as an ingredient to make a dark, rich coffee oatmeal stout that’s perfect for your next beer break. We’ve called it Arabica Dabra. Sadly, rubbing it won’t result in a genie, but you will get a slightly shinier bottle.

There is a fair amount of coffee aroma on opening this, of course.

This leads to an interesting mouthful of beer, nice level of bitterness and a wash of coffee. Not sure if the bitterness is from the coffee, I’m guessing it is.

I’m pleasantly surprised by how mellow this is, and how this has struck a nice point in a profile that makes it easy to enjoy.

It does though lack a couple of things that you might expect in a stout. One of them is the rich malt notes that should be in the middle, and so the body is a bit thinner than I might otherwise enjoy.

Did I mention that I thought this was a nice beer? For a ‘commercial’ beer, and the price this is I think I’d have few qualms in having this in the fridge for the days you need a stout.

Ideally would need to be enjoyed with some food of some sympathetic kind, I think that the father-in-law might enjoy it too

MrsPdubyah did ok with this one, picked in her criteria of ‘price’ and “because”, making it 2 from 2 of late, her last effort being the Russian Lager.

It was kind of an Amy Winehouse afternoon\early evening, and so a few of those songs got played including this “You Know I’m No Good”

The pdubyah-o-meter rates this as 9 a of its things from the thing. I know right, commercial beer gets my ‘great’ scrore in the arbitrary way of things. Because frankly this is a bit good as it goes, and stout or dark beer lovers would enjoy and appreciate that this isn’t the challenge of some other stouts that are heavily roasted malt and alcohol laden.