Odd Beer, Odd Music, Odd numbers and Odd one out.

” Pretty gentle not too aggressive  and a soft bitterness to finish. ”

Brewed by Lakeman Brewing Company this on in  the style that is  India Pale Ale (IPA) and the are in holiday destination  Taupo, New Zealand 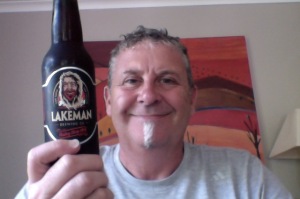 Aromas of summer fruit citrus with a  hint of pine.

A smooth rounded malt ends with a bitter finish.

I’ve never had this, therefore you can deduce that since I was in Taupo last and now the brewer has introduced a couple of new beers,  Not that you could tell with the dearth of information on the intertubes abut them.

So apart from a lack of internets presents what could go wrong with this?

Citrus hop aroma on opening, which is fairly muted and seems under carbonated, or may be right carbonated.

Pour is a dark chestnut colour and with a a small but persistent off white almost orange tinged head.

It looks ok in the glass does this. The aroma really picks up and blooms in the glass a lot of orange citrus, I had to put the glass down because that was a bit of a pleasant surprise and I wanted to go again.

It delivers too in the taste, that’s a cracking balance of bitterness and malts with a decent length and a muted and understated finish.

I’m really happy and surprised because I wasn’t really expecting a lot, based only on what you can read and discover by not moving from the keyboard.

It fills out in the middle as it gets warmer. I’ve thoroughly enjoyed it. The warming adds some depth and drys out the finish even more, so the lovely citrus is still available up front and then you get a kitty journey that is a nice interlude to the next sup.

The pdubyah-o-meter rates this as an 8  of its things from the thing. It is a surprising beer, with a lot of nice things going for it. The scant information appears to be close to the mark, citrus, bit of malt and a pleasant finish.

I went to “The National” as a change of music, from the “High Violet” album, this is “Terrible Love”