Samuel Adams Boston Lager.  A gift which I failed to look in the mouth. But never let it be said that I’m a snob, and this is a beer you can readily buy and enjoy.  So Boston Beer, Boston the Band,  Sports numbers and Cheers at the party.

a full, rich flavor that is both balanced and complex

Brewed by Boston Beer Company in the style that is an Amber Lager/Vienna and they are, no surprises here, in Boston, Massachusetts  USA

Samuel Adams Boston Lager® is the best example of the fundamental characteristics of a great beer, offering a full, rich flavor that is both balanced and complex.

It is brewed using a decoction mash, a time consuming, traditional four vessel brewing process discarded by many contemporary brewers. This process brings forth a rich sweetness from the malt that makes it well worth the effort.

Samuel Adams Boston Lager® also uses only the finest of ingredients including two row barley, as well as German Noble aroma hops. The exclusive use of two row barley not only imparts a full, smooth body but also gives the beer a wide spectrum of malt flavor ranging from slightly sweet to caramel to slightly roasted.

The Noble hops varieties, Hallertau Mittelfruh and Tettnang Tettnanger, add a wide range of floral, piney and citrus notes, which are present from the aroma, through the flavor, to the lingering smooth finish. We take great pride in the Noble hops used in our beers. They are hand selected by Jim Koch and our other brewers from the world’s oldest hops growing area.

Among the world’s most expensive, they cost twenty times as much as other hops.

What could possibly go wrong with that? Well Vienna Lager is of course the darker maltier version of lager, which if done well is a treat. On the other hand if it’s made with ‘the world’s most expensive hops’ how was this half the price of other beers? 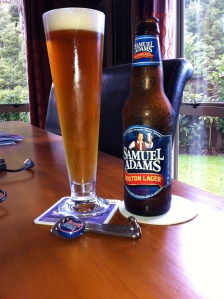 Dark malt aroma, quite intense, Pour is the most glorious bright burnt orange beer with a lovely head of firm foam that looks a right treat.

Aroma in the glass is more malt beer than anything else, just dialled up a bit.

Taste is hard to pin down on this, there is a lot of sweetness thorough this that somehow bring a sense of a full bodied beer.

This is a very hearty and enjoyable beer. Enjoyable that it isn’t challenging and you can drink it without prejudice, foreboding, expectation or thinking too much about subtle hop combinations and brewers notes.  A Couple of these in an afternoon wouldn’t be a bad way to waste a couple of hours if you had to. Sure there are better beers, there always are, always. I can imagine this being popular as offering a different take to a lager, and yet not be a bitter, sort of beer someone who wanted to show off just a little bit to a crowd of standard lager drinkers might drink.

The pdubyah-o-meter rates this as 7 of its things from the thing. It really isn’t bad. It isn’t spectacular.  Rates as well as the other Vienna Lager types I’ve had, and is a style that is probably not explored or enjoyed as much as it might be.

Musically, of course not Boston, nor Aerosmith,Pixies, The Cars, NKOTB, Boston Dolls, Mighty Mighty Bosstones, or Lemonheads,  but I went with the DropKick Murphys.

Dropkick Murphys are an American Celtic punk band formed in Quincy, Massachusetts.  This is “‘I’m shipping up to Boston”

Your typical macrobrewed Dark Lager, often rendered dark with either brewer’s caramel or black patent malt, but each brewery will have a different approach. Aside from caramelly notes, these beers will not typically resemble other dark lager styles so much as they do the lighter styles, due to low amounts of hops, malt and body. Vienna as a beer style was theorized by Michael Jackson, but his oft-cited example was Negra Modelo, which is a macro dark lager like all the others. Some beers have taken on the idea of a Vienna lager as a distinct style, loosely based on the 1840 Anton Dreher beer, and these can be expected to be all-malt, with a fuller body and more character than the average macro dark