In what seems a never ending vein of a beer type I’m back to a ParrotDog / Two Birds Double Stout. Not that I mind, at all.

Brewed by ParrotDog  in Collaboration with  Two Birds Brewing  in the style that is an  Imperial Stout and they are in Wellington, New Zealand

It might seem like quite an interesting time to launch a DoubleStout given that these past weeks have still felt like summer but we’ve held off for so long now that we even forget it’s in the tank sometimes… After a few pre-release kegs and a number of customer requests, we’ve decided that now is as good a time as any to release our Two Birds collaboration DoubleStout. 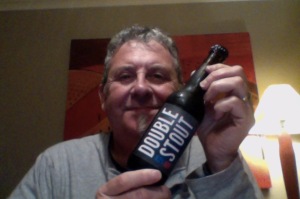 This beer is a result of some impromptu planning and wanting to brew something bigger than we’d ever brewed before… During ‘The Road to Beervana’ last year in August, we had Jayne over from Two Birds Brewing (in Melbourne) to brew what would be our second collaboration beer with the Birds.

Brewing this beer was quite an interesting time for us, as a lot of the planning for it was done on the day… including a last minute decision to scale it back because the mash tun was about to overflow.

The beer’s been ready for sometime now, hence the pre-release kegs you might have seen pop up at some festivals, however, being a bit of an awkward time of year to launch a stout (summer) we decided to hold onto it for a bit longer.

Well, we didn’t anticipate summer to hang around the way it has been but we did make a decision to release the DoubleStout in autumn and it’s here now

Chocolate nose on opening, and something else I can’t quite guess at.

Aroma in the glass, I though was of dankness, but it passed, then I got raisins.

Taste initially I thought was really nice and smooth, roasted malt chocolate thing. Then I sipped again and though it was incredibly boozy alcohol astringent forward.

Then it seems to calm down and the chocolate notes came back. the alcohol to the back at the finish where it is sharp and briefly insistent.

A bit of a conundrum then. Double things going on, sometimes this, sometimes that. I’m going to let it warm a bit. Might change things.

I had thought this would be a lot better, for no reason that thought. It isn’t for me far too much alcohol tang, but then it is a higher ABV beer.

The pdubyah-o-meter rates this as 7 of its things from the thing. It isn’t between good and better than good but not very good. the pdubyah scale is easy to understand. I thought it might have been more full in the middle notes which would have made it outstanding.

Music for this – I found a band ” Cold Showers” their album ” Matter of Choice ” on Spotify. I thought they were like Depeche Mode, I’m probably wrong.