Brewed by Monteiths Brewing Co. (DB Breweries) in the style that is : India Pale Ale (IPA) and they’re in Greymouth, New Zealand

Man has a free beer!

A new young beer style, this RIPA is our west coast interpretation of a partnership between a full flavoured IPA and an Amber Ale.

Brewed with 7 different malts for body, sweetness and a ruby red hue, a unique blend of NZ and international hops build the backbone of this rich but elegant beer.

Grapefruit and floral hop aromas are balanced with caramel and malt characters with a hint of spice.

The aroma is reminiscent of English style bitters. 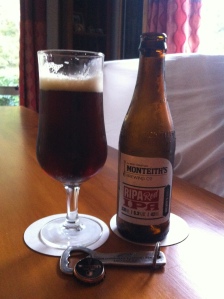 Pour is  glorious red brown and a lovely head that looks the part. Not a lot by way or aroma in the glass though.

Genuinely this is not a craft beer by any of the ideas of what a craft beer might be, because it’s brewed en masse by large brewery concern.

This however does not make it bad or ‘evil’.

I was surprised and smiled at the rich taste that this has, and it really looks great in the glass, the picture does not do it a justice and I was too lazy to turn on the lights in the early evening gloom.

There are a few problems though. The lack of aroma is a bit odd, and whilst it gives you the impression of being bitter, it isn’t and the predominant taste is that sweet caramel malt it has.

It isn’t a full flavour or full mouthfeel beer.

The pdubyah-o-meter rates this as 7 of its things from the thing. This would be a nice beer to get standard beer drinkers in to a crossover to more flavour packed and crafted beers perhaps. It is a fine and solid effort and the marketing people clearly know their audience, delivering something that looks different, and quite pleasing on the eye, and has some flavour and a hint to bitterness, but without all the fuss and nonsense of one of this ‘flash’ beers.

Music for this:  ” Winterpills” and ”  Love Songs”  which I have on Spotify