Beer club night, already!, and it’s a brewer who’s beer I haven’t had. Black Sands, who’ve made an IPA, and they’re local to Auckland.

Brewed by Black Sands Brewing Company in the style that is  India Pale Ale (IPA) and they do that in small quantities in Kelston, Auckland, New Zealand

Black Sands India Pale Ale is a full flavoured New Zealand style IPA. Made from a base of five selected malts, it is generously hopped at every step of the brewing process with a selection of the finest locally grown hops, including Pacifica and Nelson Sauvin.

The full, soft bitterness and citrus and gooseberry flavours are perfectly balanced by the rich caramel taste of crystal malts.

This beer has a superb lingering after-taste.

As an IPA you’d of course expect grassy, but this is more a lime note than many things it could be. Colour me odd.

Very hazy orange pour that delivers a stark white head that isn’t big but seems to want to hang around a bit.  Aroma in the glass is more orange citrus now and that familiar grass thing.

Sharply bitter, much more than expected! But it’s backed by quite a push of malt that sort of balances it out, almost, and the dryness is more of the lips than the back of the tongue on this. 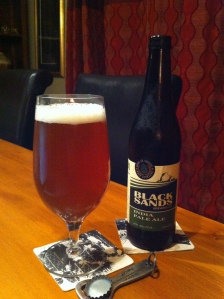 It is quite the fruity beer, but the bitterness is quite raspy and sharp and not at all refined and behaved.

Some of the beer club people noted that this seemed rather sweet, I’ve not overly noted that in my bottle, and am rather fixed on the bitterness and the front of mouth dryness. Not that either sweetness or dryness is odd or should put you off. It is nice to have some feedback and check and balance though, perhaps. But this is what I’m drinking and I’m sticking to my guns.

I realised suddenly that I’d been distracted and otherwise occupied, which says a couple of things about this beer.

It’s nice enough to just drink and enjoy without too much effort and no thinking about it, easy going and just a good beer. It also says that it might not be interesting enough or stand out enough to be a leader or setter of the bar.

Lucky I stopped myself wandering  in a daydream in time to enjoy the last few mouthfuls and pay it full attention.

The pdubyah-o-meter rates this as 8 of its things from the thing. It’s a good bit of beer is this, lovely and dry and bitter where it ought to be, lovely and sweet and rewarding where it should be, and a little bit odd where you don’t expect and that should make you smile. I like the Nelson Sauvin hops they’re always reliable and deliver a good beer.