BeerJerkNZ beer of the week  a Rogue Santa’s Private Reserve Ale. Got to be happy with that.

A double hopped Red Ale, reddish in color with a roasty, malty flavor and a well balanced spruce finish

This one is brewed by Rogue Ales in the style that is of an Amber Ale although I’ve also seen it descried as American Amber / Red Ale, indeed Rogue themselves call it a Red Ale, and they are in Newport, Oregon  USA 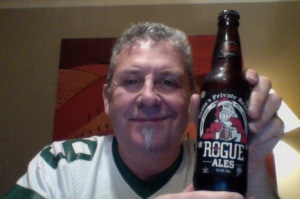 This holiday elixir is brewed with  [..] . free range coastal water and proprietary top-fermenting Pacman yeast – Our Snowflakes Glisten in the dark!

Sooooo what could  possibly go wrong? I’ve had this before and quite liked it.

The aroma on opening is quite deep,, malty rich.

Pour is darker than I remember, rich luxurious deep orange brown, with a head that showed promise but didn’t in the ned deliver.

Aroma in the glass mostly that malty thing, perhaps a little of that steeped fruits thing, at a pinch. Left for a few minutes though it seems to have become a lot richer. I like that.

A interesting beer that seems to want to have more body and oomph in the middle, but does have some nice spice taste going on there, and it’s held up a bit by that malt sweetness.

It’s not so strong though at the finish and the dry is oddly dry and flat, like a dust.

I’m again not sure about this as a beer, I think it’d like to be fuller and bigger, but I think it’s also trying to be a hoppy amber ale, with a twist, I also think it’s a bit of a mix.

So, whilst not a fan I’m not completely against it. Which seems similar to the thoughts I had last time I drank it.

The pdubyah-o-meter rates this as 7 a of its things from the thing. I can’t find a horrible thing to say about it and at the same time there isn’t anything that stands up and shouts “pick me”.

The Tragically Hip, often referred to simply as The Hip, are a Canadian rock band from Kingston, Ontario

A style without definition, amber ales range from bland, vaguely caramelly beers to products with a fairly healthy malt and hop balance. Often the differentiation between a quality amber and an American Pale is that the amber might have more dark malt character, or a less assertive hop rate.