From the brewery with some of the best label artwork, Panhead – Black Sabbath. Again. when I though it was very good (8) but hard work near the end. But I’ll go again.

tribute to the rock and roll originators of the name.

Brewed by Panhead Custom Ales  in the style that is of  Barley Wine and they are Upper Hutt, New Zealand

There’s an elemental darkness at the hear of this massive Black Barley and Rye Wine.

You can feel it wafting rich, dark fruit up from the glass with powerful overtones of tobacco and bourbon.

Like its stable mate The Vandal, Black Sabbath is inspired by a famous John Reid-built kiwi hot rod, but at the same time we think its strength and uncompromising character also pay considerable tribute to the rock and roll originators of the name.

Dark black, almost flat pour, not quite the syrup, and a head that is perfect, while it lasts.

Aroma in the glass is that steeped rain thing that you’d expect.

I don’t know how else to say “Full noise and drama” on the first sip. It is very very rich, very very full, sweet, bitter, sugary intense. 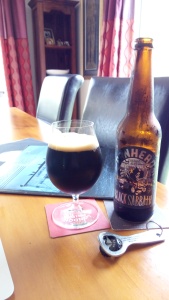 Also has an unmistakable alcohol tang at the back, this isn’t a lightweight or beer to be then taken lightly.

Perfect to the Blunderbuss!

You can see the alcohol film on the glass, sticky almost as you drink and sit the glass. Mesmerising, but I guess that 11% will do that for you .

It’s a nice beer, but it’s also seems to be missing a bit in action in the body, where it seems not to be full enough, or give you as much of a fullness in the mouth that would really kick this out of the park in terms of roundness and brilliance.

The pdubyah-o-meter rates this as 8 a of its things from the thing. The double dip review. Which is the same as last time, a long time ago, and I didn’t read that piece of work until I’d got this far, where I said something that  I think was worthy of including as a quote…

Which is pretty much still true. I’ve had smoother better barley wine beer, but then it’s called Black Sabbath for reason, right?

Music for this :  Vinyl on Sunday.  ” Jack White ” and  ” Blunderbuss” which you can listen to on Spotify if you want to  or if you’re John and want the playlist of selected tracks  which will be a work in progress.

He is known as the lead singer and guitarist of duo The White Stripes, and has had success in other bands and as a solo artist.

Related articles – see what I did here 🙂