Saturday starts here, Craftwork Anniversaire 2016, a quiet day, I went to the park to watch the first game of the football season, should have taken sun cream. so I settle in with a fine beer and a jolly good listening to of some fine music.

Bottled on 05 September 2016- batch #1 and they say its good in the bottle for 5 years, or in my case this afternoon.

Brewed by Craftwork this is styled as a  Saison and the are  in Oamaru, New Zealand

A tart and fruity Red brett saison, aged in a Waitaki Pinot Noir barrel on our own Redcurrants for 6 months this super-sour has a highly appealing musty, fruity, furry nose.

.. “a really nice balance of sour and malt in the mid palate”. Bright and biscuity, with a layer of dried citrus peel and superb length of flavour..

Take lid off, bed to take goodly whiff of beer, get nose full of over excited foam that came forth.

Bright red pour into the glass with a nice orange tinge head that started big and fell back to something more manageable but smallish. It really looks nice in the glass.

Aroma is more red-wine tannin which is, again, to be expected. 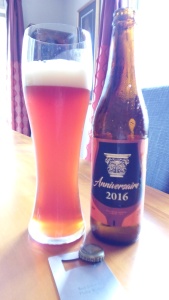 Well now. Wow would be a way to start talking about this. It is very tart, but not sour, in a puckering way, if that makes sense. There is a firm middle of fruit and it lingers on the tongue and in the mouth, and you can’t help but smile a bit as this is rather good.

It is such easy drinking, that tartness refreshes and keeps your taste buds alive and on alert, it’s not quite addictive or moorish, but there is urgent anticipation in this.

I’m told that this beer comes second to the one I didn’t get, which I will now get, and might get to it next review (which isn’t always the next beer I’m having, right)

The pdubyah-o-meter rates this as 9 of its things from the thing. This is jut superb and brilliant beerwork is this. Loves it from that lovely aroma to the last sup of the glass, and all that happened in a thrice that I sat and wondered where it’d all gone. Sometimes just the one isn’t enough and this is one of those sometimes.

Music for this:  ” James Blunt ” and ” The Afterlove ” on Spotify

…Since reinventing himself as a Twitter banter lord a few years ago, James Blunt has proved he can do more than just mewl about pretty women..