There are quite a few good puns around ‘Saturday Night’ that this could easily grow into the alternate to the single beer review, where all that happens is I do some Jive Talkin’

In this then the first of no doubt an ongoing series; 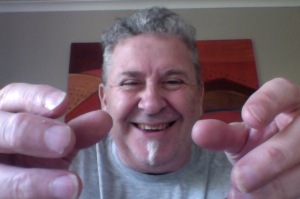 I’ve got another couple of hopefully decent beers that I’m going to have with some great new musics, or short of great music at least new. 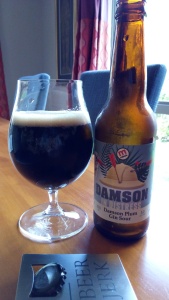 She’s a tart one.

First up- Mike’s Damson in Distress Damson Plum Gin Sour I quite like a Gin, and well what could possibly go wrong. This is a 330ml bottle of a beer that is 5% ABV (about the 150 calories) and this is a 1.2 units of drink in NZ.

I had to let this warm up, because the bottle says ‘cool’ not ‘cold’ for the best balance. Beer often changes as it warms, I guess they want you to get a head start on the magic.

The Pdubyah-O-Meter easily at 8 on this, This is heavy towards the Gin side of things, and the sourness is sharp and high as well, but they’re doing it together and neither is winning. The lovely fruitiness that this has is a wonderful counterpoint and makes this a rather nice bit of beer.

Music is from one of my favourite bands The Knowledge by Squeeze and I don’t care what you think it’s great.

A celebration of the Cryer Malts that are the big thing in NZ at the moment, probably for a good reason and get your duffle coats because ” uses new Low Colour Maris Otter (Malt)..[..] and one of the highest alpha hops in the world coming in at 20.4% alpha acid.”

That’s a burning of hop richness and a strong malt sugar. A Rather unusual aroma though, it’s familiar but also a bit off kilter too. (See notes above..)

Then the taste is like a sledgehammer! Tangy, fruity, bitter, almost puckeringly so. No hiding in this. That’s a loud beer.

The Pdubyah-O-Meter  at big 8 There’s no hiding in this, it’s loud shouty hops and picking bitterness keep your attention front and centre. The balance of the malts is a knife edge. But it’s a shouty beer and wears away at your ability to drink it in anything other than sips.

The Music, well it’d be mad to stop at the one so I went with  Spot the Difference by Squeeze

Then I’ve got from the fill station the Panhead Supercharger APA. This is beer that is 5.7% ABV  and that’d be 4.5 Standard drinks per the litre that I have.  I’ve had this previously and possibly been rather harsh, it’s got that ‘cat-pee’ hops in there, and I’m brave enough to

give this another go, just to see if I’ve changed my mind. But you can only like what you like.

On Checking I’ve had this at least 4 times that I tapped the app. I can’t not not like it then. Who knew my mind.

Weirdly I thought the aroma was bready which I know it can’t be. But that’s a familiar taste and although it’s less jarring than I remember it still reminds me that this isn’t the fullest of beers in terms of mouthfeel that I’ve had.

It’d be a great tap regular though, and yes I’m not so down on the hop aroma in this, it’s looks fine too, rich orange brown in the hipster glass I’m drinking from.

The Pdubyah-O-Meter  steadies at  7 I really don’t like the hops in this. Which isn’t to say that this isn’t a good beer, because obviously I’ve had it out and about, which means that I’m not hating on it, I just don’t love it, and in my denial perhaps I gravitate to it in some weird dissonance.

Musics of course more of the same : Cradle To The Grave by Squeeze

So there you go, what a journey that was, the weirdly compelling Gin Damson Plum sour, that’s a memorable beer that reminds me of Sloe Gin cocktails, The in-your-face Cryonman and the steady as she goes Supercharger.

I did note that I wrote memorable that reminds me of

I’m always open to suggestions of music, the blog has it’s own playlist Pdubyah and Beer and of course I’m always up for banter about beer, the brilliant and unassailable Crystal Palace F.C or anything really, I’ll even talk on your podcasts for the love. Add me on the untappd, give the FB page a like, it means more to me than you, Tweet me, or just pop a like on this post, again it means more to me than you.