Back to the US of A for the next up a Stone – Pale Ale. Brewed by Stone Brewing Co. in the style of a  American Pale Ale
Escondido, California USA 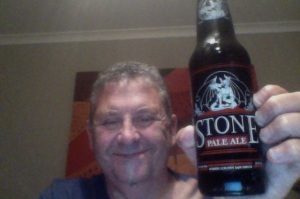 Stone Pale Ale is our Southern California take on the classic British ale. Deep amber in color, this beer is a robust and full-flavored interpretation of the traditional style. Its bold malt character is perfectly complemented by a judicious amount of hops, lending it a subtly enticing aroma. This is an ale for those who have learned to appreciate distinctive flavors and have a thirst for something out of the ordinary.

Deep amber in color, Stone Pale Ale is robust and full flavored. A delicate hop aroma is complemented by a rich maltiness.

Again a bunch of aroma from hops I might not be familiar with, and I picked an orange note because I had to give it a name. A decent pour of nice amber beer, with a reasonable head, already I like it on looks.  The aroma though might seem to settle to yeast or doughy note.

It for sure isn’t bitter, and is fairly light on the tongue. It carries a decent carbonation too.  There are a few layers in this and the up-front taste hides a length that ends in bitterness, which isn’t as pleasing.

There are some other things in the taste, you could make an effort and reach for them and attach them to citrus things, they’re not unpleasant and remain, for me me, just a bit out of grasp.

I don’t like this as much as I might, the overall falls to a slightly bitter depth, and tellingly the bitterness is a bit apparent in the after note, the finish. So upfront you get a off yeast aroma, a gentle malty introduction and then it comes with a bitter finish that might not be expected

I’d say that at 7 on the pdubyah-o-meter this has just made the bar. I might be swimming against the grain a bit. I thought the yeasty aroma was odd, I thought the bitter kick was surprising, and I can’t figure out the other tastes, I may have gone into this thinking it was more than it was, I came out thinking it was less.

Repetition aplenty in this beer, it’s lucky I’m, not with mates else I’d be sent off to think up some other words.