in for a pound, to follow that thinking… following the Plum Ale from Three boys I have a Mike’s Taranaki Hefeweizen Cloudy (THC) – Brewed by Mike’s Brewery in the style of a  German Hefeweizen and that’s from the rugged Taranaki, New Zealand place. 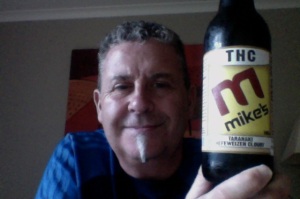 As much as I want to put a more fulsome description here you can have “Bananas, cloves, Cloudy” And nothing to do with Marijuna.

Almost a quite uncomfortable aroma on opening, might just be the banana.

Very cloudy golden pour, of course without a head, because that’d be impressive if I could pull that off right.

Looks flat, but I know it isn’t, has a similar sort of aroma to a wheat beer :-).

And then….. wow a mouthful of something that really surprised me! Really chock full of a nice fruit base, with a hint of top sour, but a bit disappointed by the finish that left a lingering, how can I describe, plastic taste. I might be going bonkers.

Also this is a bit thin. There isn’t a lot of carry. Also I’m not going bonkers.

So it falters and falls at the hurdle. This is at best averagely a 6. There are some highlights in this, but they are real point thing, and not part of a whole story.

No cloves, the banana might just be confusing me as something not overly pleasing, it happens,  bit of bubblegum thing, but the initial excitement wasn’t long lived. I think I also just poured the floaters into this, the dregs, making it even cloudier and thicker looking. More fool me.