So what better way to celebrate a #NZSecretSanta gift of a beer glass than have a beer ?

Brilliant Ale – Brewed by Shepherd Neame in the Style of a  Golden Ale/Blond Ale and they do that in good old Faversham, England.

a 5.6% ABV beer in a 500ml bottle, which in NZ is 2.1 standard drink units, also importantly 168 calories. No idea why the calorie count would be important but it is. It’s a new thing. 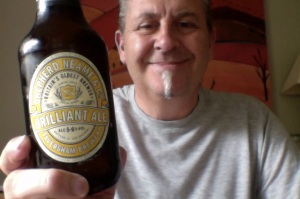 window and onto the oak mash tun, inspiring the brewing team to brew a beer that echoed these hues. Historically this recipe was formulated with 100% pale malt and was bittered by the brewery’s signature East Kent Goldings hops, resulting in a golden, brilliantly bright, hoppy ale which has risen Phoenix-like from the ashes of time for the modern drinker to enjoy. Says head brewer Richard Frost, “According to brewery records, Brilliant Ale was first brewed sometime between 1825 and 1855, making it our oldest Classic Collection beer to date. Although we’ve rejuvenated it by using the modern hop variety Cascade, we’re staying true to the spirit of this great pale ale, which was hugely popular in its day. 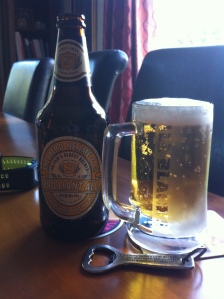 It’s surprisingly bitter though, and that was a surprise. Of the aroma there is only the musty pub smell that is familiar to most English beers.  I wonder if it’s the cascade hops they’re using.

Sits well in my new drinking glass too 🙂

Is it brilliant though? I’m not sure that I can longer tell the difference between British beers of a type, it’s amazing how you can get involved with more flavours and varieties and lose touch somewhat. It’s not a bad thing however as this as a staple wouldn’t be ultimately as rewarding as you’d think.

The pdubyah-0-meter likes the glass a lot more than the beer :-), with the beer being just about a 6 which is just above average on the arbitrary scale of things .

Comparison though , and this is where you could get offside, is a question. This or 2 Heineke\Grolsch\Stella  beers. I think I’d have this to be honest. Mostly because honest is what this is. It looks great, sits well, doesn’t have a chemical sting in it, is refreshing and is readily and easily drinkable. If I was sitting in ye olde englishe pub I’d probably have one or two of these as a lead in to something more hearty, like a decent porter.

Alas not a beer for the ages and the sun in the eyes in the morning can play tricks on you.

Flavor Profile: Who doesn’t love a good grapefruit aroma and taste in their IPA? As one of the “three C hops,” the cascade hop is notorious for providing this character to both the flavor and aroma of a beer. Floral and spice accents are also seen with this variety which sees most of its usage in Pale Ales, India Pale Ales, and an occasional Lager.