This is one of the christmas beers I received – Renaissance Discovery American Pale Ale.

Brewed by Renaissance Brewing in the style of an  American Pale Ale and it’s made in sunny Blenheim, New Zealand

We’ll bet you can remember your first glass of Sauvignon Blanc, all those racy, up- 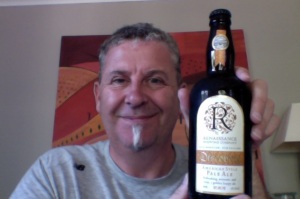 Of course a Selfie !

front fruit flavours and that bracing punch of acidity. Allow us to introduce the beer world’s equivalent from the home of the world’s best Sauvignon Blanc.

Pioneered in the American state of California, American Pale Ale, or APA for short, was designed to showcase the unique resiny fruitiness of American hops. Here at Renaissance we have given this style a truly New Zealand flavour by using Cascade and Willamette hops that are grown over the hill in Nelson.

Great hops aroma on opening. I pour into a glass and it goes bonkers! all hiss and road and mostly foamy head really really foamy, really all over the table, and it shows no sign of slowing down, it looks like a maelstrom in the grass!

So I wait for it to subside before I can try.

Patience be damned, I tried though the foam and got what I felt was an unpleasant bitterness, sour bitterness, and not a hop bitterness that I was expecting. But it s a great orang golden pour and the head is a magnificent fluffy white to be enjoyed. With a spoon perhaps.

This is a pity because I had, I think, 16 new beers when I was travelling, mostly Australian,  mostly good, but I digress, because this is disappointing when I think back and compare my memory with what I have in front of me now. Not really comparable.

The pdubyah-o-meter says that this nudges just  7, there are a number of things floating in this bottle that makes me think that I didn’t get a good one, I don’t recall a pale ale having a sediment to be careful of. I don’t get crisp, I get sour, and for all the excitement in the glass I get a flatish beer.

I’m sure that my recollection of Renaissance beers is better, and I’m going to forgive this as an aberration. The aroma indicated promise, but the delivery of taste didn’t come anywhere near that