Honda Accord NT – a quick drive around the block

Those nice people at Honda New Zealand can’t help themselves, they keep calling and asking if I want to drive their new cars.

This time it was for the Honda Accord. I could take a pick of the V6 or the 4 cylinder.

So what were the ‘bells and whistles’? The ‘NT’ name for the top-specification Accord stands for Navigation and Technology.

This is a bundle of things including adaptive cruise control (which works between 30-180km/h),  You set a cruise speed, and then a distance to the vehicle in front, the car then brakes or accelerates to match the object in front. It’s like magic.

There’s also something called Collision Mitigating Braking System (CMBS) with audible/visual alerts and initial braking activation. I activated this once on an on-ramp manoeuvre, got a few beeps and some yellow flashing lights.

Best though is the Lane Keep Assist System (LKAS). The car recognises the lane markings, on the motorway, for instance, and then keeps the car in-between those lines. Steering itself. Like magic. Seriously you could take both your feet off the pedals and hands off the wheels, the car would continue as usual.

You’d be daft to do that, but in the interest of a test I did. Weird experience a car steering itself, and then accelerating to keep a gap, or breaking, it would do both things.

However, the lane keep thing only works where there are clear lanes to keep to.

There is also a unique blind spot monitoring system that shows the view from the left-hand door mirror in the centre-console colour screen that is displaying the sat-nav map.

The centre-conole display also changes to the reversing camera view too, but it’s worst feature is on start up and a warning that you’re supposed to be responsible and makes you click a button before it changes into something more useful.

I believe the steering is a fly-by-wire affair, which would make the LKAS more probable. 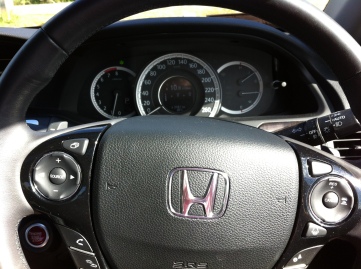 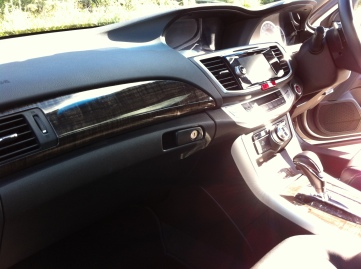 all that tech and you can curb the mags

Anyway, I had the car for an hour. It was magnificent. It’s comfortable, quiet, and it accelerates a dream. the technology works, I’m sure the technology I didn’t use works like the BlueTooth connection.  The user manual would be an interesting read.

Annoying things? The connection for  your media device is in a cubby hole, very design, but not the best.

Interesting thing? Keyless start, you can keep the key in your pocket, the car detects it. No idea how it works if someone else jumps in the car and drives off, does the car detect that the key isn’t in or near the car and stops? I’m sure the Honda boffins have thought that through. However if the keys aren’t in your pocket they’re a bit awkward a shape nd size to put in the centre console. Nit-picking.

Completely enjoyed this car, the multi-adjustable seats through the flappy-paddle gear-box with both sports and normal settings. You can have sports and eco at the same time it seems.

It also has Driver and Passenger specific air con settings, which is handy, and the quite ride might be due to  the Active Noise Cancellation technology

Fuel consumption says 8.1 car said 10.1 and it wasn’t being driven gently, or as gently as you would if you owned it.

Would I like to own it, I really would. Would I spend $55,000 on a car? That’s the doubtful thing, and I have no real idea of what comparable cars in this price bracket there are. But then I’m not looking for a new car at the moment.

Would I encourage you to drive this car. Absolutely. It really is a stunner. So many technology things in one car, so much car, so much fun.