Beer – out and about – Deep Creek Brewery

I decided that rather than mope at home, now that I may be jobless, that I would make a trip to the local pub, in this case the Micro Brewery – “Deep Creek Brewery” who are in Browns Bay (and they have other brewing facilities of course – they make bottles of the stuff now) 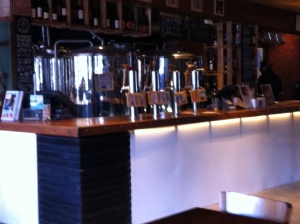 I came specifically for the Tsar Bomba beer, which is an American Amber / Red Ale, at 6.5% ABV. So a pint of this is about 2.75 standard dink units 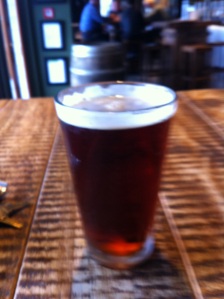 It was served a lot warmer than I would have served it,  but then I’m not an expert, and of course it’s a pint, the head looked ok but disappeared by the time I got the the table I was sitting at.

It is a lovely chestnut colour and has a lovely lacing in the glass, I can attest this as I’ve been supping and enjoying this.

Its  taste is high in caramel and therefore sweetness, and not at all bitter, or its pleasingly bitter and has a decent finish which isn’t dry or uncomfortable.

This is supposed to be a ‘Fresh Hop Brewed Beer”. I’m not convinced that it’s a success as it might be overly sweet and less harsh that you might be expecting. From memory it’s also similar to another of the beers they brew, “The leprechaun’s Belle”, or their “Little Armoured one’

Essentially then, a ‘special’ beer, but on a well worn theme. Which is all fine and dandy and there is nothing wrong with that at all .

The pdubyah-o-meter rates this as 7 a of its mystery bag of numbers akin to a 10 sided dice.  It’s a lot less harsh and a lot sweeter than you might be expecting, but it is pleasing and pleasant and a nice beer for a showery afternoon watching the world mooch past.

And then…. I had the “Undercurrent Pilsner” a 5% ABV beer, that of course is a pilsner. A Pint, no flash glassware here it’s how they roll.  So this is about 2.1 standerd drink units

Brewed by Deep Creek Brewing Co of course as a  Pilsener and they are in walking distance from me in Browns Bay Auckland, New Zealand

Point breaks, sunshine, crisp beers on hot days. This easy drinking pilsner has a calm malt profile, with a swirl of floral aroma, and an undercurrent of citrus zest. We take its bohemian beginnings and introduce a taste of New Zealand with Nelson hops, to produce this latest wave in the Deep Creek set. 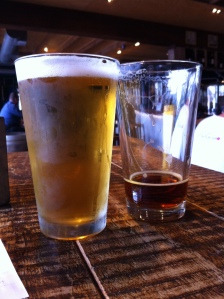 Origin: A New Zealand spin on a Czech innovation creates a stunning lager base, bombed with the fruity Nelson ‘Sauvin’ Hop. The passionfruit undercurrent and special lager yeast achieves a crisp, dry flavour. This session beer is a winner for those long summer days or a Pilsner/ch’i hybrid for those after a handcrafted health kick!

Smells that great Pilsner hoppy in the glass, I’m sure I looked weird smelling my beer like that.

This has a banging amount of hop delivery, but I thought two things, It’s not as cold as I’d serve it, and again I’m not an expert, and I also though that this was a bit thin in the delivery and body.

The pdubyah-o-meter rates this one as 6 on the wheel of fortune scale of things, It promises more than it delivers. Also harping on, this was served a lot warmer than I would have liked it. Did like the grass hop note that persisted to remind you that this really could be a good beer if they tweaked a couple of things. Wonder what it’s like really cold?

I’ll add more, that as this warmed it really did take on a much deeper and over-riding hop laden beer, which surprised me.  Better.

I could get used to this more relaxed life-style I’m not sure I have enough money or patient enough wife for that to happen.

3 comments on “Beer – out and about – Deep Creek Brewery”