A peculiar name and I didn’t realize it was local,  I have Weezledog – DickleDoi Imperial Ruby Ale.

So then, from Weezledog Brewing Company but brewed at Black Sands Brewing Company this is in the style of an Amber Ale or depending on where you read about it an “Irish Red Ale“, or the brewer says “Imperial Ruby Ale” and they do this in Auckland, New Zealand.

“Too hoppy and strong to be considered a traditional Irish Red, but far too malt focussed to be called an American Amber/Red Ale, Imperial Ruby Ale is what it is; big red and malty.”

Big, red and not shy on the malt, somewhat of a forgotten ingredient in many modern beers. A huge malt base of biscuit, dark crystal and a pinch of chocolate malt provides some fruitcake-eskey notes with a hint of nutty roastiness, making for a truely unique beer. We let the malt play front and centre for this beer, so the yeast is American, keeping it clean and allowing the NZ hops to really smash through late.
Anyway, enough salesman speak… buy it, try it, and let us know if you think it’s as good as we do. After all… It’s all about the beer.

Let them know? Last time I let someone know I got free beer, the time before that I got cussed out :-).

Loud hiss on opening, it seems well carbonated then. Rich aroma of things.

This is clown beer. There is carbonated and then there is plain stupid. This is Stupid. 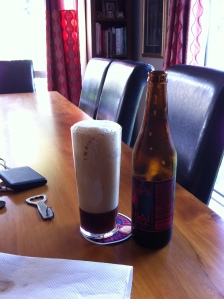 So, Pour #2 coming up, this could be serious points off.  And it’s marginally better in that the head is only a lot instead of being the all 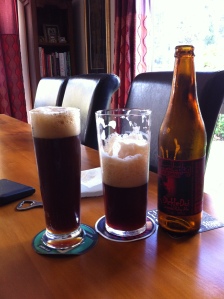 Now taste, and luckily this makes up for it in spades! Lovely rich malty nutty taste. That’s a real revelation. In my head I’d written this off, in the glass it’s a pearler!

Deep dark pour, not a lot of aroma.

I can’t believe how much I like this beer, they really have delivered with the malt layer in this, and it’s really easy on the bitterness, which makes it really drinkable and enjoyable.

More than that it’s quite refreshing too!

This reminded me of a beer I once had a lot of in Brighton, or had a lot of once in Brighton –  Becketts Old Snowy. 1983 or there a bouts, with my now dead friend Simon.  That was before the internet and everything.  As an aside we went there for a boys weekend away for beer and pool. We checked into a Bed and Breakfast place and were asked if we wanted a double bed. I can tell you liberal as I am this wasn’t the question we were expecting, although to be honest Brighton was known then as the Gay friendly place. We chose the B&B as being near the pub.

Anyhoo! What a fantastically nice beer with lots of unexpected and pleasing taste.

The pdubyah-o-meter rates this as 9 a of its things from the thing. A surprisingly nice beer that is rich in flavours, has a fantastic nuttiness and a full length taste. Decent very decent.  I’d encourage you to try this if you like red ales, irish beers or just a full flavoured beer that isn’t an IPA or Stout or Porter.  I’d be tempted to challenge you not to like it.

The red ales of Ireland have a gentle maltiness, caramelly, earthy notes, and a generally restrained hop character. They are session ales, so alcohol is generally at 5% abv or less, though you will find the occasion stronger example.