Brewed by Beavertown in the style that is an India Pale Ale (IPA) and they are in Hackney Wick, England.

“Blood Orange IPA” Zest and juice of blood oranges were put in the kettle at the end of the boil. Big rounded modern IPA full of orange flavours.

This has some of the best art on a beer bottle for a long time.

However  the interwebs does not garner a lot of information given away about this beer though Nose full of rich hops and spice on opening, pours very cloudy and uninviting, but has a decent head. 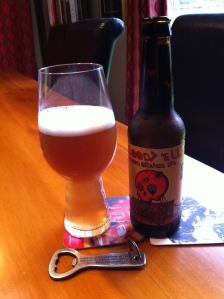 Has a really full mouthfeel and is strikingly bitter, and surprisingly this bitterness doesn’t end in puckering, and seems to be under control.

There is a citrus zestiness too, and this is understated and in check.

Since I’ve finished this, quick smart, I forgot to mention that you can pick the alcohol in this, and let that be a warning!

The pdubyah-o-meter rates this as 7 a of its things from the thing.  In that weird place where the bitterness appears to be more than it is and the citrus appears to be less than it is, but together it just is an is. Somehow.

Bit a find at the shop in Wairau Road , near here, Union Jack’s British Food Store and I picked up a couple of beers from there that I hope are going to be as good as this, and if I’m being honest I’m going back to get a few more.

It being one of ‘those’ days, I’m listening to an album by Erasure –  Other People’s Songs – includes this –  When will I see you again