I’ve had strange beers in the past, notably the Rogue Donut ones, but this Ballast Point- Indra Kunindra might set a new mark.

Brewed by Ballast Point Brewing Company in the style that is described either as a Foreign Stout or you might see it as Spice/Herb/Vegetable and they are in the lovely San Diego, California USA 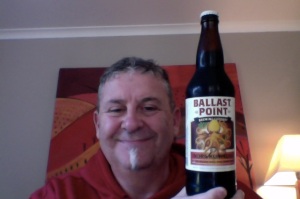 Our India-style Export Stout is a unique collaboration with award-winning homebrewer Alex Tweet. Released in limited quantities, this explosion of South Asian flavors is reason enough to kneel down and thank the heavens. It’s further proof of San Diego’s status as a brewer’s playground, and a beer lover’s utopia.

It is then with slight trepidation that I open this. 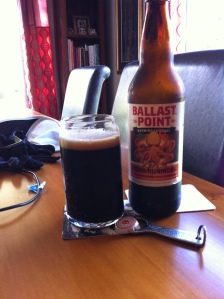 Pour is dark dark, and has a nice head, seems to sit well in the glass.

The taste is like liquid curry powder, lucky I was expecting and yet surprised at that.

Then you get to thinking that this is the oddest of all odd things, but you realise you drank a half a glass.

So powerful ‘curry’ aroma, and a taste that is mostly of cumin, little bit of heat burn in the back of this, but there is a softness in the drinking to, something that is flattening this out.

Don’t know what though as this is dominated by the aroma, and the cumin on the front of the palate, oh and the slight heat kick at the end. It is very subtle and clever mind.

The sort of beer that you might get out to wank off in front of your peers about your amazing new taste buds or cutting edge engagement with the new craft movement. I recall a few weeks ago talking about how sour beer was the new coming, this is the complete opposite and heading in it’s own direction.

As it warms a bit in the glass and contemplates itself you can actually if you really try pick out some coconut notes.

Overall then, an aromatic beer, with some interesting and very pointed flavour notes.  Pleasingly bitter, and with a decent amount of flavour that has both the upfront taste and the carry and finish, even if they’re at odds with what you might be expecting.

The pdubyah-o-meter rates this as 9 a of its things from the thing, for audacity and sheer brazenness. I don’t think that this is simply a beer where they toss in at the end a handful of spices and hope as it’s become a standard.

I found that I had drunk the all of it, and sat her scratching my head as to why I should like it less, or why it was just plain wrong, however it’s not unpleasant, it is confrontational, and yet the drinking is easy and rewarding. The flavours are persistent and not an afterthought,

It is truly possibly the best deliberately weirdest beer I’ve ever had.

Today, Sunday, was a day to listen to some other musics, and so this album in on the music machine thing “Come Summer Come Blues – The Abandoned House of Micha Lueckner & Susi Tunn in 14 Songs” by Guitar.

There is no video for this, that I could find. but let me say that some of it is “artistic interpretation” or “performance art”

Any ale or lager made with herbs, spices or vegetables. The additive should be distinctive in the aroma. See beer description for flavor. Body, color, hop character and strength vary depending on the type of spice, herb or vegetable used