I stopped by a new (to me) place Brothers Beer in town today and brought me some “Pelican Imperial Pelican Ale” that was in tap to take home in a growler.

This is brewed by Pelican Pub & Brewery in that well travelled style that is India Pale Ale (IPA) and they are in Pacific City, Oregon USA

Our mascot, Phil the Pelican, has recreated the flavor of the British Empire with his own 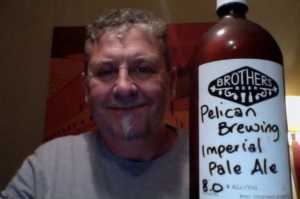 Imperial Pelican Ale – which is an Indian Pale Ale, why quibble..

American twist. Enjoy the huge Cascade and Centennial hop aroma, the subtle malty sweetness, and the floral, citrusy flavor of this robust, gold colored ale. This brew began life as a seasonal beer during our first year and was so popular while we had it, and so frequently requested when it was gone, that we turned it into our fifth regular beer style our second year.

Our mascot, Phil the Pelican, got this Imperial IPA recipe from his long-lost Indian cousin, and has recreated the flavor of the British Empire with his own American twist. Enjoy the huge Cascade hop aroma, the subtle malty sweetness, and the spicy, citrusy flavor of this robust, gold colored ale.

Get in! Oh and Phil is a great name for a mascot…

Cracking amount of hop aroma on opening this, nice wee hiss too, sweetness too. Winning so far. 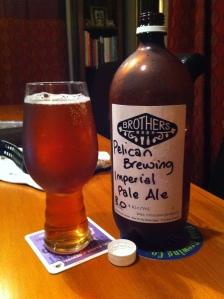 No head in the pour, but I’m putting that down to the ad-hoc bottling that went on, including the producing stick thing, not the best way to decant beer I’m sure.

Aroma moves to ‘fruit’ which could be oranges, tangerine, and the initial taste is one of a nice bitterness that isn’t too sharp or tart and a decent finish too.  Still winning.

There is no hint whatsoever that this is am 8% ABV beer and it is indeed a beer that you could indulge and quaff a bit of.

I am despite the little nit-pics really enjoying this, although to me it could do with a bit more middle, some sweetness or stronger malt thing.

This is a really clean drinking, and then, sessionable beer, if you can on an higher ABV beer that is.

The pdubyah-o-meter rates this as a steady 9 a of its things from the thing. It was from a tap into a growler, and might have lost something, probably not much. I may have enjoyed something with a bit more middle or body. But I enjoyed it a lot anyway.

When I write the  answer to #3 I actually do imagine the outside, sometimes late afternoon, sometimes evening, sometimes last thing at night, sometimes a fire, or somesuch. With this beer I really could imagine that, the sharing this, and truth be told I’m only 6 numbers short of winning the Lotto first prize*.to make it happen…….

Needless to say I think you should give it a listen.