Another beer from the nice people at Tuatara, this one their ITI,  this is the companion to a beer I don’t have, the NUI (Mighty Big Hop APA), which I will get to as soon as I can. I hope.

Brewed by Tuatara Brewing Company in that style you know as: American Pale Ale and they are based in Paraparaumu, New Zealand

This is in the smaller 330ml bottle, still with the lumps and bumps of the bigger bottles, and it’s only 3.3% ABV, so only 0.86 of one standard drink in this bottle. Only 99 calories too. Sounds like a winner. 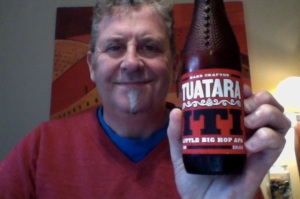 Man in need of haircut holds up a beer

Here at Tuatara we understand that your enthusiasm for hops has mutated into a full-blown obsession. We also know that your king hit of the beloved cone often comes with alcohol levels that can turn an evening into a lifetime. ITI (te reo Maori for “small”) is what you’re looking for.

It’s got the New World hop slam you crave from Citra, Simcoe, Amarillo and Cascade, but with a subdued malt background and a very diplomatic 3.3% alcohol. It’s the ideal session ale for the unreconstructed hophead.

So a nice afternoon beer, even it was cold and raining outside.

Aroma does not carry to the glass, which is a pale golden/brown pour with a thin and whispy nod to a head. 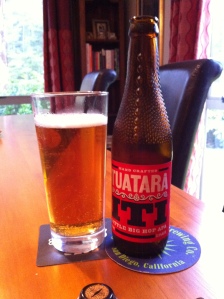 Wow and there really is a bop of hops in that, again that really is a nice thing.  The really surprising thing is that the follow up quaff is still the same, a burst of hops that washes over, and you get the pleasing bitterness, and it’s not dry, nor too overpowering, or long. Muted aroma and sweetness do not detract.

This really has only one weakness, and that is that it is a bit thin and lacks that bit of body. But that’s a given right? Or perhaps I’m missing the point, or is a low ABV beer with loads of ‘real’ body the nirvana of brewers? You can boost that by adding malts I guess, and that then would alter the whole profile and make it sweeter or sugary or thicker, but at the loss of the hop bitterness?

Perhaps not so, as I think then of Pilsner beers that have hop edginess and a similar body fullness. Perhaps this is just clever by too much.

This is a big of a good beer in my opinion, and a big step up from mass-produced fare.

Which leads you to the next gripe…. (and I am getting off this bandwagon and will not bring it up again)

I get the quality of ingredients, I get the custom packaging, I get it. I don’t get how that makes this beer that should sell in bulk the price it is.  Actually I do know how – but there is such a gulf between mass domestic and quality equivalent but it’s a big gap.  Around a 50% gap

The problem I foresee is that this will not be a big seller for that, for the extra $ you’ll go the NUI or something with higher ABV and similar taste profile, you just will, be honest.  And then they’ll stop making this version. Which is a real shame as this deserves a big audience and following in my opinion as an easy drinking low impact (relative) beer that would go a session and more without boring you or becoming cloying or unpalatable, and probably won’t give you a metallic hangover the next day.

Finishes beer. Luckily has another in the fridge. Enjoys it again.

The pdubyah-o-meter rates this as 8 a of its things from the thing. The only things holding this back are  really that it’s a bit lacking in the body where you would expect it to be. Being fair though If I was doing low/midrange beer comparisons this should be the winner by a long way.

MrsPhil came home, asked why I was drinking so early, I said of course that this was a low alcohol beer and would happily use an mechanical device having had one, which was a mistake as I just earned some new chores…….

I had the music player on David Bowie and in particular the Hunky Dory LP, this “Oh! You Pretty Things” from what is still after many years a bit good as albums go.

Not my favourite David Bowie album but it really is worth another listen if you haven’t for a while.