Despite everything wrong with this I’m going to attempt to drink a Bachata.

Made by Flagship Brands, brewed at SHS Drinks and in the style that is  Pale Lager this hails from Manchester, England, not a million miles, literally, from Cuba.

Premium lager blended with golden rum, a touch of vanilla and a hint of orange zest to create a 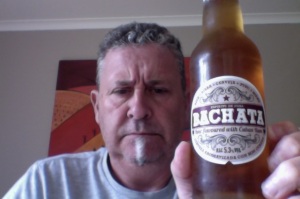 That is a full frown

Bachata is a style of music based on Cuban salsa with Afro-Caribbean rhythms.

Bachata beer was inspired by Alvaro, a Cuban musician who travelled the world jammin’ with Latin bands and partying at every opportunity.

Alvaro enjoyed a few drinks after the gigs, but often disappointed with the local lagers, he would flavour the beer with a slug of his favourite rum and a wedge of orange.

Orange slice in my beer. I’ll give it a go what’s the worst that can happen

Aroma is unmistakable lager. That is all.

Pours like lemonade. Of course the aroma is not of the orange slice, carefully added by me as recommended, Probably a good thing.

I can’t even begin to equate this to being a beer suitable for an audience, like you could so perhaps with a Radler that MrsPhil would enjoy for instance, for me this ticks none of the appropriate boxes.

If I gave this to a rum drinker we’d probably not be friends any more, there is more rum flavour in rum n raisin ice cream, or chocolate bars than there is in this.

Possibly because I added the orange slice though, thankfully

The pdubyah-o-meter rates this as 1 a of its things from the thing. I can’t imagine this being a thing, but I bet it has a fan or two somewhere, who thinks their a bit Che Guevara or something, but this comes from Manchester so probably a polyester tracksuit wearing chav.

Cloudy early afternoon, and it felt like a John Mellencamp blues kind of afternoon – so Trouble no More Live is on the musics, this is a track from that album.