I make a return to a beer that I really liked and found on tap so I could take it home with me as I’d drink it out on my travels.

Liberty C!tra, is brewed by Liberty Brewing in the style of a  Imperial/Double IPA in New Plymouth, New Zealand

Tonight I have a 1 litre, 1000ml, of a 9% ABV beer (that’s about 7.2 standard drinks), 99 IBU things, and all this in a a simple bottle that I filled at the fill station at Liquorland Newmarket, early night much?

What is in a name? 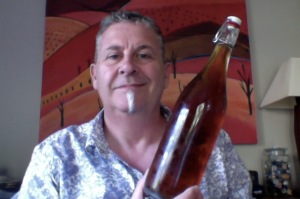 Under conventional language guidelines you would expect to find any number of consonants, and to a lesser extent, you will find the odd noun.

But if your have a look at the name of this beer, you will find that it has an exclamation mark right in the middle of it.

What’s that all about? Doesn’t that just seem a little unusual? It’s definitely not a typo – and if you’re reading this, then I guess it’s done it’s Job.

The next step is to take this bottle home. Go on. You won’t regret it.

As you can see, in the bottle, as it will be in the glass, looks like a polished chestnut brown. 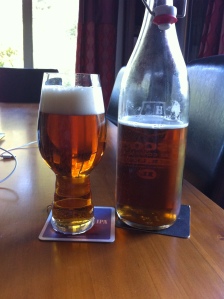 Huge burst of grass aroma, sweetness and sugars, it really does give a full aroma experience.

Fantastic pour to a decent a persistent full and foamy head. And a large noisy mouthful of grassy bitter sweetness with a decent carry  that finishes towards dry but not parched follows. And again as I went in wonderment to the well again.

This has real bitterness in it, and if anything too much caramel at the bottom.

Nice amount of things like perhaps Mandarin, grapefruit (more aroma) but this delivers quite a hit of complex but raw favours, it is a bit lop-sided or uneven.

So, unbalanced then perhaps, a lot of bit notes, all very nice in and of themselves, but some of them are discrete. Not that I’m not liking this, it has a great presence and a is a lovely hop heavy high bitter IPA.  What is doesn’t carry is a big aroma, so you don’t get a nose before you get a taste.

Despite being hop heavy this does not deliver a harsh grass carry, and the aroma, as it warms does being to come to the fore. I mean that the particular hop/grass thing isn’t all of it. As it warms the sweetness in this begins to bloom in the aroma, and this adds to the whole.

This beer is a showcase then, and has been a staple on the brewers list for at least two years. Highly and correctly. for a NZ comparison this is like The Epic Hop Zombie, which I rated (10), on the random thing (and was on the tap today but I went with this).  The IPA selection is as broad as it is long, and there are some stunning beers in there, I’ve had a few. I’d like to make two observations (1) IPA is a standard for a brewer, and therefore there is a wide selection of interpretation, most brewers go the more hops and bitter, because just because (2) Some of the interpretation hits the exact spot of an audience, could be sweetness, bitterness, dryness, but not all ‘well rated’ IPA are good IPA’s for the ‘everyman’.

Where does that leave me on this? Well C!tra is malt and sweet heavy as it is hop heavy and the sweetness and associated weight that gives to the beer is the more predominant of the things you experience as you drink this, that is you get the malt hit then the bitterness, it could almost be cloying. It is a ‘sticky;’ beer, it coats the mouth, dominates your taste, and becomes  loud and persistent.

I actually quite like it, despite being all over the place like a mad woman’s hair on the favours, layers, length, notes, and delivery.  It really might just be me picking. This beer C!tra was 2nd= in the recent New World Beer awards thing –  The Liberty Yakima Monster – won, and that’s a beer that I’ve rated as 3rd after the Hop Zombie and the C!tra, but then (a) I’m not a judge and (b) it’s about accessibility of the beer. No point in picking something that leaves your mouth like a desert after a bottle, you have to get close to the edge for the everyman, but not too close to the sun.

Again, Where does that leave me? Well I haven’t yet found anything that would make me change my mind on this, it’s a cracking beer, heavy bold annoying cloying and in your face, at the edge, not for the faint of heart and stands up without shame as being a bit of a bully.

The pdubyah-o-meter rates this as a 9 on of its things from the thing. Remembering last time was a 9, and that was from a bottle, and so long ago.  This is, as taken, an IPA that is loud and brash and punchy, for that it’s really should be recognised. It’s not the pinnacle best,  there is something missing, or short of whole, there is a lot of sum, a lot of chorus all singing, at the end of the day, a bit loud and out of sync.

But I finished the bottle and sat and grinned on the lounge furniture like it didn’t matter.

Music was interesting. Although not the album I was listening to I’m compelled to share this track ‘Pink Frost’ from a band called ‘The Chills” as to the “New” part of this the particular album I’m listening to has tracks that are all new to me, hey it works.  You should enjoy this though.

Beckoned by John Peel himself, the first time The Chills entered the BBC studios in Maida Vale it was a dream come true for the little band that could from New Zealand. Exporting the kind of unique pop smarts that only emanate from Dunedin, they were only too happy to graduate to the fully stocked studio and show the UK what they really had to offer. Removed from past budget restrictions, but pushed forward by the time constraints of a one day recording, the results produced a rush of superior recordings of their early material, without losing any of the charm so vital to their appeal. This was the real sound of The Chills.

They’re from New Zealand, and this is pretty much a Kiwi standard at a party.