Carolina, a name of a beer that made me sing, and in a shop that is a bit embarrassing. So Singing beer, singing songs, numerical scales and numbers attending.

“Putting Out The Fire”

Brewed for the Epic Brewing Company (NZ) who do that at Steam Brewing Company, this is in the style that is Amber Ale and that all happens in Auckland, New Zealand 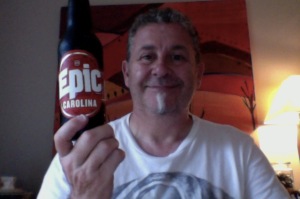 Putting out the fire

Epic Carolina was originally released along side Culley’s Carolina Reaper Chilli Sauce which uses the hottest chillies in the world.

The beer is made to accompany the spicy flavour of the chillies.  There is NO chilli in the beer.

The original release was a batch of keg only stock earlier in the year. Our customers have been asking if or when it will be returning ever since, so we decided we needed to make a bottled batch.

A rich amber colour, which comes from the specialty malts, but used in a way that the isn’t overly malty. The beer is still very hop driven for its style. We have used Centennial and Chinook hops to deliver the floral and citrusy aroma and flavour.

And there indeed is the Hot Zombie Sauce!

And my interest was piqued, and nothing could go wrong with that, could it? “Putting out the Fire”  is a legend that appears on the table above the “Epic” wording it’s dark on dark and so might not be apparent to the casual observer.

I even brought the completely unrelated Sauce collaboration. This from the brewer  explains that it was formulated to accompany a hot-wing eating competition.

Beer for Chilli competitions? Lagers seems to be more the norm on the Curry night. Who knows with these things. 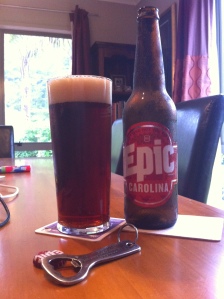 Now then, that is a complete burst of hops and sugars on opening, resinous but not sharp and pointed.

A fabulous dark and rich brown red pour, and a lovely firm off colour head, you can smell the carousel of aromas in this, and that’s before the nose has a sniff. Which then you get to, and this is rich and heavy, bit not for me floral in a way I get. Then I’m just me.

That is well bitter and comes with an earthy blanket that is completely the whole taste. an assault on the taste buds.  There is a lovely balance in this though, as well as being bitter over and above it’s stated weight, this has a luscious middle cushion, and it finishes sweet and not dry, and has a decent linger. Wait long enough and there is a burp.

I seem to be getting ahead of myself and writing an almost love letter to this, but it isn’t. It isn’t an IPA! I find myself again thinking about Red beers.

Clearly I’m at sea around them, or even in this case Amber Ales. This does have a singular aroma and you get that introduction as you begin to sup,  but they seem to be slightly different to each other, the aroma and the bitterness aren’t a pair, perhaps they are.

Is this a confused beer, or am I confused drinker?

So far then: It looks great, pours great, leaves a great lacing, has a great name and tag line, has aroma that is persistent an is bitter above its weight, It has a lovely balance of malts in the middle and the finish begins to tend towards dry. I’m still confused though. Of Course.

The pdubyah-o-meter rates this as 8 a of its things from the thing. It is very good. But it’s good at something strange. For me there doesn’t seem to be enough balance in this, as it warms the hops and bitterness just get  louder and more aggressive, to the point where the end of the bottle might become pleasurable, because it is finished.

I’m sure that this has and will have a bunch of fans that this is for them the ducks nuts.

Music to sing to then, Well it’s by no chance that I have been listening to some David Bowie, but then when you listen to this you’ll get the “Putting out the Fire” reference.

So whilst disappointing that the “Putting out the Fire” isn’t exactly a hat tip to David Bowie and Cat People it did make me sing in the shop, and that’s not always a bad thing.

Over at Buzz and Hum they say