Another in the summer of FYO beers, this one is also by coincidence from MOA, I seem to have had a few Moa beers recently, I’ve not become a one-trick pony, honest. This the for my entertainment a keg only beer – Moa Hoppy Kölsch or Hoppy Cologne

Fermented using a traditional Kölsch yeast at relatively warm temperatures, the objective has been to produce summer ale with good drinkability

Moa Brewing Company in the style that is a Kölsch and they are in Blenheim, New Zealand

Pale straw colour in appearance with a nice lingering head, this German style ale is brewed with predominantly Pilsner malts with a touch of Vienna and Wheat, 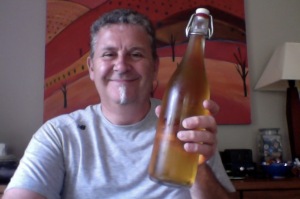 It deviates from style in bitterness and hop character. It has a bitterness of 45 IBU and is both late hopped and dry hopped with NZ Motueka and Australian Vic Secret.

Up-front it has a passionfruit and pineapple fruit characters that give way to some pine and lemonade-type citrus flavours. A mild white wine character with some slight spiciness, this beer has a lingering clean after-bitterness with a dry finish

What could go wrong, I’m keen to sit outside in the sun and have this, the Focaccia style bread is on the rise in the warm place, the prep for dinner is done, it’s that quiet time.

Clearer than I expected, in my head this is a cloudy or hazy beer, and it is also paler than I imagined. Perhaps I imagine too much.

It is green grass hoppy on opening, pour is nothing exciting and I didn’t get as full a head as I wanted to.

Bitter, yes, but without that ‘bite’ of a Pislner type beer, and a nice grassy mouthfeel that matches the aroma, and the finish is nice too, nothing too edgy or dry.

If anything this might be a little sweeter, but don’t ask me how you’d go about that, aside from adding something as I’ve seen with other Kölsch type beers, e.g. Honey. 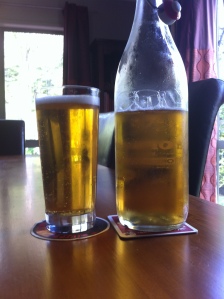 You have focus on what this is, and what it isn’t, for the style that it is this is pretty decent, but then I have no experience generally with Kölsch, and so you wander back to comparison with Lager or Pilsner styles that this looks and somewhat tastes similar too. Which is a mistake as this isn’t that.

Lacking a high effervescence and I didn’t discren any esters, but that’s not to say that I didn’t like it, because this is really really easy drinking and soft on the palate and mind. This however will not make your friends envious or jellies of your beer buying exploits, despite it being a nice beer it is of a style that is unfamiliar and perhaps difficult to explain or be different in.

What sets this aside for me is that the aroma is strong in the glass and the mouthfeel matches that aroma, you get the forewarning as you lift to sip, sup, or gulp, as is your whim or fancy.

The pdubyah-o-meter rates this as 8 a of its things from the thing. Because it could have been a pretender and this is a lot nicer when you put aside your prejudice of similar styles, and you then get a nice hoppy well rounded soft drinking beer. I’ve enjoyed drinking this, even if it’s not a go-to style nor would I rush to it necessarily.

Musically, well I’m not a big fan, nor I hope am I jumping on a bandwagon of #FauxGrief but Joe Cocker died recently, and whilst I don’t like some of his cover songs this one in particular is a bit good – “Unchain my heart”

Golden, top-fermented style native to Kln, Germany. The style has a very narrow profile and many beers that consider themselves to be kölschbiers are not. Generally they have a moderate bitterness, but fairly prominent hop flavour (typically Spalt, Tettnang or Hallertau). They have high effervescence, medium esters, but a rounded, stylish character derived from lagering.