A process that unlike batch-brewing, meant once the brewing started the beer literally never stopped flowing. The process was adopted by the rest of the World

Brewed by DB Breweries (Asia Pacific Breweries-Heineken) in the style that is a  Pale Lager and they do that in Auckland, New Zealand 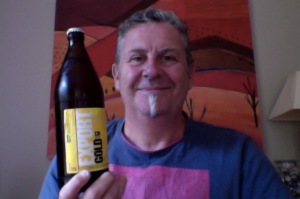 A golden lager characterised by a pleasant, slightly fruity flavour with a clean, crisp finish.

Made using only the finest New Zealand hops, barley and pure spring water, it is perhaps New Zealand’s freshest and most refreshing beer. Export gold is best served ice cold to enhance its drinkability and refreshing flavours.

You know how this ends.

Despite this being domestic mass produced it isn’t all bad. Sure it’s one dimensional and doesn’t offer up much by ay of interesting aroma, bite, finish or linger, it does offer up refreshing, crisp and quaffable. An everyman beer.

Pour is really pale yellow, and the head is white and present, it does at least look decent. It’s taste is also pretty consistent, as you’d expect. There are of course the beer snobs who turn their nose that this, which is ok if they want to, but I’ve had ‘craft’ beer that makes this like nectar.

Malt aroma dominates, to be honest, it’s a beer aroma that is familiar the world over.

Bitterness level is quite high, but at that comfortable level, a drink that reminds you you are drinking ‘not water’.

It’s not a craft beer, it’s not a batch beer, it’s science and the industrial method of producing beer.

A product the have down pat. Again the ‘craft beer’  tag is missing, by a country mile, but that’s not really the point of this.

So why include it? Well it’s a beer you can buy, or have a reasonable chance of buying is why it’s included, not just for comedy content.

The pdubyah-o-meter rates this as 5 a of its things from the thing. Despite talking it up it is at the end of the bottle a bit average and stop-gap. Quaffing flavoured water that keeps you occupied between goes at the Oche or Pool table.

Music came on, I’ve been catching up with Breaking Bad, and so this.