The 3rd time, a three-peat, that I’ve drunk this as a beer then. Except this time it’s not the same. Or is it? Let’s not get ahead of the game.

Brewed by Harringtons Breweries (Christchurch) in the style of a  Abbey Tripel from the deep south as far away as Christchurch, New Zealand. EXCEPT not, they now label is as a Saison/Farmhouse. I think they’re reaching for a style.

Beer #132  and #32 it was labeled as a “Strong Ale” look at the pictures of the label, blue then, yellow now. It scored a 4 both time I had it before, perhaps I’ll be swayed by a new packaging.

Even the brewer can’t decide on this, it’s listed still on the their website as “Belgium Tempest” and 8% ABV. 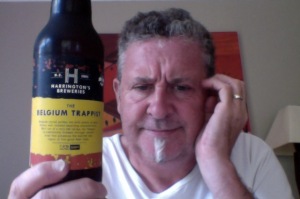 Multi personality beer, why would you frown?

Born out of a very old recipe, our Tempest is traditionally brewed with Nelson hops to a high alcohol level that enhances the warmth and vigour of this great beer style.

Brewed using Belgian Ale yeast makes this beer big, rich and full of fruitiness. Palate is rich and subtle malty. Full bodied sweetness dominates most of the palate but dies to a dryer finish with a herbal/phenol crisp hop bitterness.

So, what could go wrong? Based on the conflicting information, notes, the multi-personality labelling and all that, who knows what beer I’m having, Jekyll or Hyde.

So with a clear mind and empty head I venture forth.

Pour is a lovely rich brown and a lovely head too! Aroma though, not so much, perhaps some orange peel. It looks ok though.

Taste. I can’t shake the dull bready yeasty taste that pervades this.  BUT they’ve improved the aroma and the palate from other iterations of this.

So the you get to a point where either they have some bloody minded old curmudgeon that loves a name and thinks he’s a master of style, or I have nothing else, they’ve clearly been floundering around with this as a beer for at least 3 different versions that I can find.

Based on a name. And this one does appear different in taste from the one’s I’ve had before. Perhaps they should have stuck with Strong Lager?

Nothing at all Belgium. Nothing at all Trappist. Not even close to a Saison. not even. A Lager or Ale, someone in marketing or sucking up to the originator of the beer needs to look in the mirror, man up, and tell the man. today. Honest.

On the other hand, a really really nice drinking beer, that offers up low bitterness, a lovely maltiness, and a hint of a dry finish. If it could drop the bready yeast bit it’s be a really good beer, really it would.

As it warms it picks up a sour note, which the maltiness just fails to carry, the aroma still confuses and confounds, and the finish is bitter and not totally pleasing.

This though is a world away from the previous versions, and in the right direction, I wonder if the brewer would be open to leaning further in the same direction because he would have something good going on.

Hey what where did all the beer go, he said, disingenuously, as this is more than sipping beer, nothing that is sharp or discordant to make you put it aside, I might even venture that I’d go again on this version as it clearly is on a journey that I hope they want to continue as the future looks bright if they do. But it isn’t perfect and it is a little jaggy and unbalanced, unfinished and a bit rough. For a Brewery staple this should be more polished. Perhaps.

The pdubyah-o-meter – delightful as this is stretches t a 7.5

Lower ABV more enjoyment since when did that happen last? It has because this really is an improve on the other versions.  I’m not going to even pretend to be the voice of the punter or even to know what I’m talking about, should they even care to listen at the brewery but I might be tempted to make this a really strong ale as a ‘special’ and take it off the standard brew list where I think it’s been struggling. I have no idea their consumer test group comes from, if it is friends of the brewer people stop listening to them, really please, this has such potential.

And on that bombshell…..

Note: I was provided this beer by the brewer to try and review, without catches,  this is 1 of 12 should wonder about the sudden love of a brewer out of the blue.

I really am betwixt and between on the spoken word as ‘singing’ and yes I include ‘rap’ in that, and only John Cooper Clarke or Sam Hunt should be allowed to do it.  Send me a message if you want to discuss this 🙂

Like other abbey ales, Tripels are strong, yeasty-malty beers. But they are also pale, and have a notable hop profile. Hop bitterness may be higher than a typical abbey ale, up to 35IBUs. But the finish is where the hops really shine, as tripels should finish fairly dry. Otherwise, maltiness is still essential to the style, and the assertive yeast note typical of all abbey ales will be more apparent in tripels, since they do not have the rich dark malts to distract the palate. Alcohol flavours feature more prominently in Tripels that in just about any other style.