So to a Harrington’s “The Rogue Hop” an Organic Pilsner.

Brewed by Harringtons Breweries (Christchurch) in the style that is of Pilsener and they are in Christchurch, New Zealand 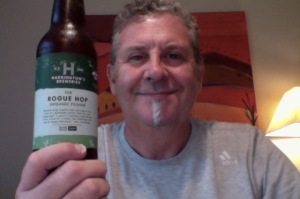 Organic as opposed to inorganic?

Brewed with Organic Malt and Hops to the style of a Bohemian Pilsner with our own Rogue Hop to give it an exciting strong yet lingering hop finish.

A great one for a mouth feel challenge!

That has a nice hop fresh aroma on opening.

That aroma really blooms in the glass on the pour. Really pale and with a really decent fluffy head to top it out. very inviting.

I was expecting more ‘bite’ in the palate, that distinctive thing, with this it’s less pronounced but that doesn’t seem to handicap what was a nice first impression.

The profile of this seems to be very even and the tastes are all there at the same time and without a dominant thing, making it really quite quaffable really.

The hop aroma is a really nice greeting to the nose as you lift to tip, sadly though this doesn’t translate to the hopiness in the beer that I would like.

A beer that talks a good talk then, all the things it has and does are good but not quite great. I’ve had worse though, trust me, this isn’t a bad drinking beer.

As it warms some of the hop grassiness begins to show through, it leaves it late.

The pdubyah-o-meter rates this as 8 a of its things from the thing. That makes this on the arbitrary scale as ‘very good’ it is nicer than some Pilsener beers that I’ve had, and not as good as some others. There isn’t a lot that you would take away as memorable from this though, it is at the end of the glass just another Lager beer, just a bit better than some.

Note: I was provided this beer by the brewer to try and review, without catches,  this is 1 of 12 should you wonder about the sudden love of a brewer out of the blue.

Musically then I was listening to “The Black Keys” for no reason at all, the album of course “El Camino” Listen here

The Black Keys is an American rock duo formed in Akron, Ohio in 2001 – this track “Lonely Boy”