Harringtons Wobbly Boot Porter Ale, craft beer in a can!

Brewed by Harringtons Breweries (Christchurch) in the style that is of Porter and they are in Christchurch, New Zealand 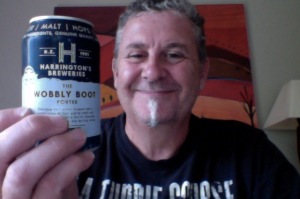 Canned Porter, made me smile

Porter style ale, brewed in the traditional way with a blend of four specialty coloured malts imported from England; the original home of porter ales.

Pours a clear, dark, orangey brown with a creamy, beige head leaving some lacework. Sweetish aroma of hard roasted malts with a whiff of vanilla. Medium in body with sweetsih, hard roasted malt accents and some sweet licorice. A light ashy touch while the bitterness is very discreet. A very quaffable Porter.

What, I ask myself again, could possibly go wrong?

I should be less dubious of a Porter style beer from a can than I am, there are plenty of good dark beers in cans.

It’s very lively in the can, and it fair over-floweth, so you have to sip sour foam. Pour is very lively with the result being a load go fluffy off white head to contract the dark black beer, its a noisy beer, you should listen to you beer more. Really noisy. 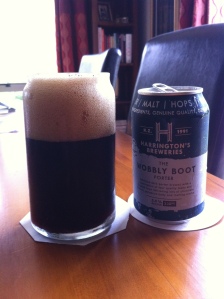 Not sure about the aroma I fell that the initial sip might have got in the way, but it seem ‘sour’, the head does settle though so that’s good.

This is really really sour and tart. scrunchy eye tart. Did I mention over carbonated making the mouth sensation all fizzy bubbles which just accentuated the sourness.

I though I might have got a tad of coffee or roasted burnt malts. I didn’t it is more like a Sour ale then anything else.

There are some flavorous fruit notes in the linger, it could be quite a nice beer if it calmed down on the bubbles, but I did not get the sought after coffee or chocolate notes that would have been a winner.

Cans are clearly a new thing for the brewer and for the craft beer people in general, I’m still dubious as to the merits of them for premium priced product, particularly for the deeper flavoured beers perhaps, ok for the Ambers, the Lagers, but you’d have to see a price point as a consumer, otherwise they get to be party pick up beers and then perhaps not so popular. I might be too old for this beer v can argument.

The pdubyah-o-meter rates this as 6 a of its things from the thing. I’m not sure this one has worked out well being in a can, it is over bubbled and under-delivered on the taste, which I know is not the case in the bottle version (from reading not from experience). I would not be rusing out to but this again.

Note: I was provided this beer by the brewer to try and review, without catches,  this is 1 of 12 should you wonder about the sudden love of a brewer out of the blue.

Musically, I was again listening to Black Swan Lane. and I have no idea why, apart fro the haunting tone of the singing. Black Swan Lane are a US/UK indie-rock band/project founded in 2007 by Jack Sobel and John Kolbeck.