a 9%ABV beer, at the fyo station, so I have 1 litre of beer, that’s about 260ish calories a serve size,  and this would be 7.1 standard drink units

Brewed by Renaissance Brewing in the style: Imperial/Double IPA and they’re in Blenheim, New Zealand

To brew this special Ale we have used large amounts of freshly harvested hops, and for that we have selected one of New Zealand sexiest hop varieties, Wai-Iti. 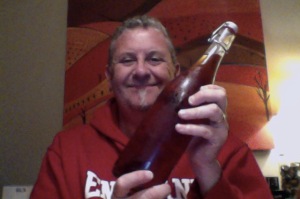 We drove over to Motueka early one March morning and got the hops fresh off the vines, then drove back to Blenheim and brewed with them in the afternoon.

Wai-Iti is part of NZ ‘Hops with a difference’ breeding program Wai-Iti bursts with mandarin and lime zest and leaves the ale with a smooth finish.

The huge soft bitterness is balanced by the malt sweetness of the base beer yielding a very drinkable heavy ale.

So then, what could possibly go wrong with that?

This is loudly hoppy aroma on opening, as you might expect, I didn’t get a background sweetness, just a hop dash.

Grandmaster pouringpour gets the lovely orange brown beer with a lovely cloudy fluffy head that is all bubbles and just nice.

That is just spectacular, a gorgeous stop and gasp amount of malt sweetness a really gently and fantastic wash of bitterness and a finish as soft as a kiss. 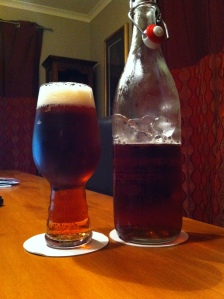 A picture of a divine creation

What a tickle up for the tastebuds this is, I’ve stopped to think, and I don’t recall having a beer that has been this good for a while. It is really remarkable that it has such a soft and accessible palate for a beer that is a DIPA and 9%ABV.

As it warms, in the few moments that I’ve managed to stop sipping, this is developed a bit more and there is a real faint citrus tang, like limes, in the mix. Oh a joy to behold.

Another day when I should have learnt how to write a Haiku.

I love the lip smacking dryness the linger in the mouth of the faintly but persistent dry grassiness, the idea that I have another glass to drink and that I can buy more, in limited supply in the keg and thereof FYO,  but it’s in bottles too.

I’d buy you this as a gift.

In the break between the first and second pours I went and had some dinner, as you do. Lamb Shanks. Anyway, the beer warms and the dryer end of the palate gets to the fore, which isn’t such a bad thing. Still such a good beer.

What I’m really surprised about, is there is a #HopFresh15 thing going on at the moment, and my local “The Deep Creek Brewing Company” currently have three beers, called Yin, Yang and YinYang. They are made with Sauvin, Motueka and a combination of both. I really like the Yin (Sauvin) as it it’s pretty aggressive and hoppy and bitter, the Yang (Motueka) is softer and calmer and I thought less, the combination was very very nice.  Anyway long story long, is that the GrandMaster Fresh is based around Motueka hops which are, by my experience, softer and rounder.  I learnt something today. Well yesterday, and remembered it today. I like the Sauvin hops, appears I like the Motueka ones just as much.

The pdubyah-o-meter rates this as 10 a of its things from the thing. I’m not even going to mess about trying to score it down and make light of the poetry, this really is a bit spesh (as the yoof might say). Lovely caramel malts, amazing bitter that isn’t puckering, but more a wash, and a finish that is a bit of a kiss and an explosion (I might not have mentioned the explosion).

Not often that I get to the end of a beer and realise that it taught me something.

Musically, for a change, Kings of Leon, an American rock band that formed in Nashville, Tennessee. This from ‘Mechanical Bull’ is  -‘Supersoaker;  you can listen to the album here