Also in a limited run of 126 bottles – the same as the total number of Kakapo in the wild!

From the FYO station, of course, 1 litre, and at 6.8% ABV it’s not session beer, with 207 calories a serve size there goes the morning run calorie credit I built up, and this is 5.42 standard drink units in NZ.

Brewed by ParrotDog in the style that is best described as  Strong Pale Lager/Imperial Pils and they are in Wellington, New Zealand

RareBird: Kakapo (Wet-Hopped IPL) has left the building for its new habitat – this is to be the first of a new ParrotDog range; a 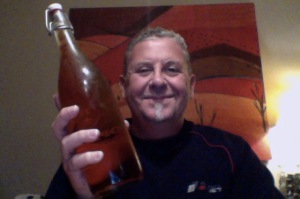 Rare Bird Beer. Get in!

This series is about creativity in brewing and celebrating the strange characters in our endemic birdlife – we’ll be working with local artists and conservationists to share their interesting tales of existence.

What could possibly go wrong with that?

Looks great in the bottle,  green hop aroma on flipping the lid, but it is quite low.  Seemed a lot lighter when I was pouring it, but it isn’t.

The aroma is a lot stronger out of the bottle, it’s now quite an oily grassy thing, which is hard to pinpoint a particular comparison to.

Than I had a sipped and then the world changed. The full explosion of favour and drama, a full on riot of taste. I kid you not. 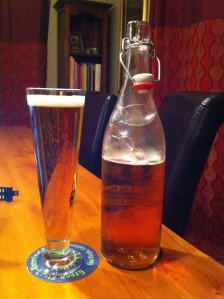 There is bitterness, but it seems shrouded in a cloak of sweetness that gives this a really full mouthfeel. There’s also that oily-ness to it, which is odd but not weird and odd, just odd.

It’s very hoppy, the aroma bold on the nose before the taste on the tongue mimics it.

As an aside this has lovely lacing in the glass.

It has warmed slightly as I’ve been contemplating and somewhat more floral notes on the palate profile are more obvious.

Unlike any other lager type beer I’ve ever had, which is a bit of a bold statement, considering the number of lager beers I’ve apparently drunk.  This has that hop edginess, but it has a lovely overcoat of sweetness that gives it a real fullness in the mouth.

The hop harshness, familiar to lager styles, is either there and masked by all the other things,  or missing. It’s there, and I’m really enjoying drinking this, it’s a bit very good.

As a beer to drink this really is quite ‘big’ it’s a full attention and immersion thing, every sip an experience and reminder, it isn’t a shrinking violet, and whilst I probably would like to ti sit in the local and have a few I think it would beat me into a submission and I’d surrender to something less loud and shouty. Locally this might make me a ‘wuss’.

The pdubyah-o-meter rates this as 9 a of its things from the thing. It’s all action from the first sip, and does not let up. It doesn’t change much as it warms either, it’s just all full on.  I both love it for what it is and I’m also foreign at it because I’d like to enjoy it without the full-impact taste explosion.

On balance I think I’d go buy more, a glutton for punishment, and an appreciator of a thing of beauty. It isn’t for everyone, but I like the hop thing, and the bitterness, and I like the sweetness, I’d prefer them to be a bit more in synch but this as is, is just a bit special.

Am I enjoying it? Where has this been all my life….
Would I have another? I would  it is very very good.
Would I share with a friend on a porch and set the world to rights? I really would, this is a revelation, one of those pivotal beers.

Music for this, ‘Little Hurricane’ is a Rock/Dirty blues band based out of San Diego. They have an album called ‘Stay Classy‘ it’s a covers album. This is z bit of a Bill Withers number. Go have a listen at Bandcamp or download it, it’s free!