A cup of this beer will be appropriate during cold periods of the year.

Brewed by Obolon in the style that is of an Imperial Pils/Strong Pale Lager and the are in  Kiev, Ukraine

Strong beer with a harmony of bitter hops and light taste.

The uniqueness of the recipe of this light beer lies in the fact that besides traditional ingredients such as barley malt, hops and water, Obolon Strong contains maltose syrup.

This gives the beer a pleasant light taste, sufficient alcohol content and fewer carbohydrates at the same time.

A cup of this beer will be appropriate during cold periods of the year.

So what could go wrong with that?

Stronger harsher hop malt aroma on opening.  Pour is a darker yellow golden and a decent and lovely head.  The aroma is more of hops though, it’s quite inviting, as Lager beers go. 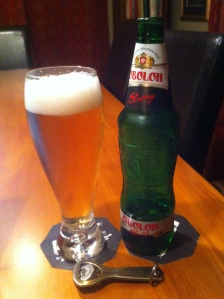 That has a much stronger deep depth of favour and taste than the premium, like they banged a bunch of malts into in. Very rewarding and makes it quite the enjoyable beer, for what it is.

The major problem though, should it be a problem, is that for a slightly higher alcohol beer this is deceptively easy drinking, and a couple of these might see you sleeping in awkward places.

So, a slightly hoppy beer, but without that hop bite or edge, a really sold sweet backbone and nothing by way of awkwardly dry or bitter finishes, and there is a sort of sweet malty mouthfeel linger.

in conclusion,  sometimes you can get bulk and substance in a glass, I’m pretty sure this was at the lower price point for beers, and you get a lot of bang for the buck.

Oh and you get a great bottle. And I’ve ticked off another country where they make a beer without having to go there.

The pdubyah-o-meter rates this as 6 of its things from the thing. This was quite nice really, it has a bunch of flavour and body that was missing from the ‘premium’ version, the only problem, should it be, is that this slightly higher in alcohol than is apparent in the drinking, which is very easy, verrry easy.

Am I enjoying it? I am, because it offers up a bit of a flavour.
Would I have another? I would, but I don’t want to wake with a sore head and in an awkward place.
Would I share with a friend on a porch and set the world to rights? unlike the ‘premium’ version I don’t know that this is a polite to take to a party beer, it’ll best you after a few and that never ends well.

Music for this, change up to ‘Desaparecidos’  a band from Nebraska the have an album ‘Payola’ that you can of course listen as you please, how you please or even here on the Spotify.

This is ‘City on the Hill’

hard not to enjoy their enthusiasm on this.