For United Dutch Breweries  this is brewed at Hofbrauhaus Wolters in the style that is Pale Lager and they are in Breda, Netherlands

30 years ago, Pauli Weidmann from germany took matters into his own hands.

He loved living and enjoying life in the valleys’ cosy villages that lie in between the green and sometimes snow white mountains of southern germany.

Although he enjoyed this life with all its famous beer parties, he was critical of the beer that was served. Hence Pauli Weidmann decided to brew his own german specialties.

So, what could possibly go wrong? Well I know this is amongst the cheapest beers I’ve ever had let alone been gifted. But this is a beer drinking thing so nothing ventured.

Pour is pale yellow but not translucent and there is a finger of head that settles to a smaller but persistent finger-nail of head. 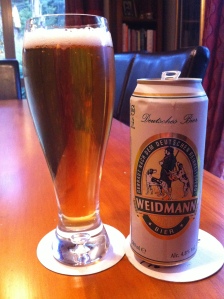 It drinks like a plan euro-lager but this one seems a lot sweeter than expected, has some bitterness and bit of a bite but it’s not big or lingering.

A competent and drinkable quenching cold lager beer, which is a good thing.

The pdubyah-o-meter rates this as 5 of its things from the thing. That’s all I have to say about this, it’s average, but far from the worst beer I’ve ever had.

The colour of pale lager ranges from light bronze to nearly transparent and the alcohol anywhere from 4-6%. Adjunct usage may be quite high, though in some cases the beer is all-malt. Carbonation is typically forced, though not always. One thing that doesn’t vary is that neither the malt nor the hops make much of an impression on the palate. These beers are brewed for minimum character, though faint traces of hop or malt may show through. More likely though is that adjuncts like corn will show through, or you’ll find notes of higher alcohols (fuel notes) due to the use of high-gravity brewing. The body will be thin and watery, and the finish is typically non-existent.