It’s BeerJerkNZ beer club beer of the week, and it’s a real change of paste with the Ballast Point Wahoo, a Witbeir. A Day late, because I wouldn’t have appreciate it yesterday, I’m sure I won’t be expelled from the club though.

True to the Belgian tradition

Brewed by Ballast Point Brewing Company (Constellation)  in the style: Witbier and they are in San Diego, California  USA 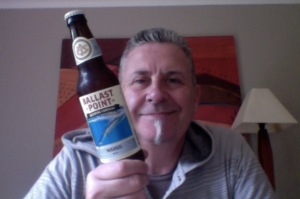 The unmalted wheat has a high protein content, which causes the beer to be hazy, thus giving it a cloudy, or white appearance. A special yeast gives a refreshing tangy flavor that is different from both the sour Weiss beers of Berlin or the banana and clovey Weizens of Bavaria. The mild hopping allows the unique malts to show through and does not conflict with the subtleties of the citrus spicing. This unique citrus character is created by adding a blend of curacao (bitter orange).

A fresh, unfiltered brew perfect for lazy summer days. Our Wahoo White is brewed with unfiltered, un-malted wheat and oats that give it a distinctive cloudy complexity. True to the Belgian tradition, this Witbier boasts a refreshing, citrusy flavor thanks to the orange peel and coriander we add to the boil. This makes Wahoo an ideal beer for year-round beach weather.

Aroma is familiar as a Witbier style, slightly sour but cushioned on a sweetness.

Pour is a lovely bright yellow, slightly hazy and a fairly firm white head of fluff. The aroma has the earthy aspect to it, again, not unfamiliar.

It’s not quit as sweet as I expected, but there is a full mouthfeel and a sharp citrus tang in the profile, and lots of linger and after-taste left at the end to enjoy.

But it is very refreshing and easy drinking, and I’d suggest a fairly good take on a witbeir style.

I’ve manage to quaff a fair amount without hesitate and with some enjoyment, I’d be happy to go again with this, it has a  lovely level of engagement in the taste, if you like the stye of beer though.

For some this might be too fruity, or citrusy, and the aroma might be odd or off-putting. Not me though, I thought it was a bit of a win, and reminds me that summer is coming and this is the kind of beer you need in the sun.

The pdubyah-o-meter rates this as 8 of its things from the thing. It’s nice, well behaved, and competent beer, it isn’t spectacular, doesn’t have overly full flavours or mouthfeel, and there isn’t massive amounts of taste lingering, although there is some, it is just a nice quenching drinking beer that I really enjoyed.

Music for this : “Cowboy Junkies ”  “The Trinity Session“   except this time I have it on CD, and it’s not on Spotify, but they have this Cowboy Junkies are a Canadian alternative country/blues/folk rock band. The group was formed in Toronto in 1985. It’s a thing from the past that sits just as good today.

Belgian style wheat beers are very pale, opaque, with the crisp character of wheat, plus the citric refreshment of orange peel and coriander. Ingredients sometimes also include oats for smoothness, and other spices such as grains of paradise. Serve with light cheeses or mussels.