Not ‘the’ BBC but a new local brewing outfit the Birkenhead Brewing Company who’ve opened a tasting studio in the village of Birkenhead. Since also a reader asked in  comment what I thought about this particular beer I felt it appropriate that I oblige with some arbitrary thought and opinions. 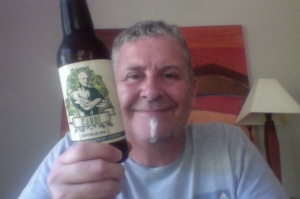 and now from the BBC…

Welcome to the flagship of the BBC – Kauri is a ‘no expense spared’ premium example of the Double IPA style, this beer is delivered on solid base of Gladfield malts and showcases tactile use of New Zealand Hops which are allowed to shine with support from less flavour-dominant American varietals.

So, what could possibly go wrong? Well the education you get on Kauri forests was great but what about the beer.

There is a sharp pine and oily reason note on opening this, as it did with a quiet hiss.

Pour is quote orange and bright with a lovely rise white head that is in itself very bright, and big, this has a lovely looking carbonation. 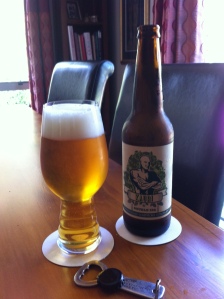 Aroma in the glass is grassy and that still oily resin note.

Taste is sharply bitter and that orange is more like a bitter marmalade taste, it’s quite needle sharp.

Also there is that spicy pepper like roughness in the carry, and the finish surprisingly is quite nice, not at all dry, but leaves a strong after linger taste that seems, with that oily note to have covered the whole mouth.

It is very intriguing, and it is a nice IPA or dIPA, which as it warms gives you more of that hop roughness or dryness, and then a funny thing happened. Nothing actually happened the beer just tilted slightly but was just as nice and equally as enjoyable.

I bet this is a belter on the taps, and since they are daily local I might just make an effort and go and visit because it would be polite and proper.

The pdubyah-o-meter rates this as 8 of its things from the thing. It really isn’t earth shattering or trend-setting, but it is a really pleasing beer to drink, it’s nice they’ve gone for drinkability over hop-shock value, and this is such a bonus. For a new brewer with hopes and dreams this really is a flying start.

Music for this : ” The Missing Season” and their album ” Getting Back ” on Spotify and Indie band from France.  Not from that album but still worth a listen is this ‘Walking in the snow’