Wedensday one-trick pony night, some new beer with one hop, art of a series that showcase single hops in beer.

This is beer of 6.4% ABV in a one litre fill your own from the keg machine, so that’s about 5.05 standard drink units worth,  also it has 45 IBU things and  180 ish calories a serve size. 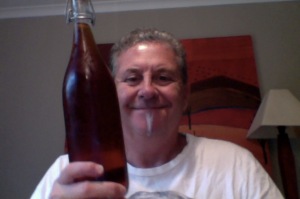 Brooklyn is a newly released NZ Hop, the first NZ hop to join the One Trick Pony series. Brooklyn is named after an area where hops are grown in NZ and has been selected from the “Hops with a difference” programme. Parentage is from Southern Cross, and has characteristics of intense fruit, citrus and resinous pine, ideal for IPA’s.

Aroma is a big hit of tropical fruit, passionfruit and citrus. On tasting the awesome fruity hop flavour is balance with a malt biscuit sweetness and finishes with a clean easy bitterness.

That has a most peculiar and really fruity aroma, intensely fruity, sugary like perhaps strawberries.

The lovely bright brown beer pours with a lovely firm head that is off-white, and settles to a smaller but persistent head

Aroma in the glass loses some of that strawberry thing and settles more towards a more familiar sharp grass note.

This is really really malty and sweet sugary thick, on top of what is really quite a lightly bittered beer, and for me it’s quite a combination that apparently works well.  Also I had a burp and that was pleasant.

There is no clue at all that this is a beer that is slightly stronger than you’d be expecting from the taste profile.

Lovely linger taste too that this has, and whilst that aroma fades somewhat that hop and malt his still delivers.  If this was your pony this would be rather the thing.

So there we go, is this a beer to savour, or is it quaffing indulgence time, beer to swig and swill? I have to say that the first half has gone down rather well, and quickly.

I’m not sure if this does have legs though, punch and body. It might be all bluster and show. It is a good show and is very convincing. and again you have to tip your hat at a great result from Luke.

The pdubyah-o-meter rates this as 8 of its things from the thing. This is classy beer done well, with a difference, less hop forward more malts and sweetness, but might be more the latter then the former.  Lacks though in a hop note that is persistent or present in the while beer, to my mind, the malt finish note bigger than that hop smack at the back.

Music for this : ” Delaney Davidson ” and ” Lucky Guy ”  on the Spotify

Delaney Davidson is a New Zealand singer-songwriter. His hometown is Lyttelton, New Zealand