With a lot of old favourite back in kegs it was a hard look today for something that I might enjoy, and was new to me, because there are so very good old favourites available again. I was indeed lucky to find the Bach Brewing Tailfin on tap, Bach brewing make some fine beer.

From the growler station then this is  beer that is 6.5% ABV, or 5.1 Standard drinks worth, that’s about 195 calories a serve size

For Bach Brewing Ltd this is brewed at Steam Brewing Company in the style that is of an India Pale Ale (IPA) and that’s in Auckland, New Zealand

The Tailfin is synonymous with 50’s and 60’s American cars rock ‘n’ roll was in full swing and free love was in the air. Easier, care-free times. . 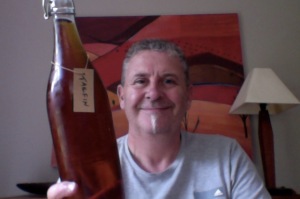 Had a quiff once…

Tropical aromas leap from the glass consisting of pineapple and passionfruit, with just a hint of fresh grass.

The palate has a full whack of hop flavours, brimming with stone fruit and citrus zest. If this beer was in the American election race I’d sure vote it in.

Was not expecting that huge burst of grassy aroma that hissed out, it is well carbonated with an outpouring forming unbidden.

Almost toffee like sweetness in this, over a really brisk and sharp bitterness that maintains the balance between them well. Lots of grassy notes in the linger too. Really did not expect that it might be this full of flavour.

This is a finely balanced beer that has a lot going for it, there is a bunch of tropical flavours in this, like perhaps apricots or similar, really soft on the tongue daring you to pick it a name.

If anything though the sweet flavours might just be the dominant in this, taking away from the bitterness that leaves it a bit unbalanced with that bitterness peaking in odd places thought that sweetness really.

But that’s not to say it isn’t a nice beer t drink, it’s a fine bit of drinking is this, and it’s easy to see why there are a lot of fans of this around and abouts to be honest. Mad not to like it.

Not a hop monster, never sets it stall out that way, but is a decent honest beer in that IPA style that is popular.  Does set itself apart in that this does carry a lot of sweetness and sugariness, as well as that fruity taste quite so boldly.

I found I drank all that first glass quite quickly.  Pour again, pause, engage…. (That’s a Rugby reference for no reason)

Second pour was as inept or worse than the first, this has the same over large white fully head, and that sweet sugary aroma that sits atop that grassy hop note.  I can’t really pick a ‘real’ fault with this in the way it is.

I can pick at why I don’t like the way it drinks, if that makes sense, after all the things I’ve picked are really nit-picks and not really constructive in any way.

Unlike the Tailfins that began to appear on the American cars that just got bigger, longer, taller, and all a bit silly. It it was up to me, and it isn’t, I’d leave this as is, because it is just about right.

At this point you know I’ve enjoyed it as there are far too many rambling words stung together.

The pdubyah-o-meter rates this as 9 of its things from the thing because some things are just that good. I might have danced about the bush a bit but in the end there isn’t a lot that is wrong with this beer at all. Genuine honest to good bitter with a lovely amount of tastes to go with it.

Music for this: “Låpsley” has an album ” Long Way Home ” on Spotify

Holly Lapsley Fletcher, known by the stage name Låpsley, is a British singer-songwriter and electronic music artist. She grew up in Southport, Merseyside. Her debut album Long Way Home was released on 4 March 2016