I was contemplating Beer, Something familiar and from the past, nothing fancy but a beer that I have a fond, yet distant memory of, so it is with a smile that I brought me a  Pink Elephant Trumpet – Still the 2013 vintage.

Brewed by Pink Elephant this one in the style of a  Barley Wine and they are based in a nice part of the country – Blenheim, Malborough, New Zealand

Trumpet is a Barley Wine. This is lovely when fresh as the hop additions areprominent with an aroma of mixed fruit leathers. 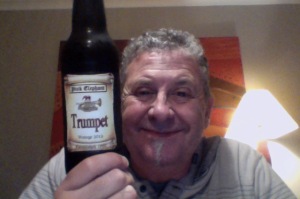 It should have been an early night

Has some caramel, Honey, vanilla and dried apricot flavours.It may be cellared for many years and will lead to an amazingly complex ale Vertical tastings are possible with this Ale

This heralds the latest release of the famous Trumpet.

It’s full and malty but also has lots of hops. I like it fresh and fruity like a newlywed but it will keep for yonks and develop well with age.

Drink this now or, if you think you will live long enough, cellar it for a few years if you can bear the wait!

It is a Barley Wine, it is now a whole 2 and bit years old…. not a lot really, it was nice last time , it’ll be nice this time, won’t it?

On opening this is rich and deep chocolate mostly, alone is very interesting.

Pour is a rich boozy whisky brown, and without a head of note, a film smeer perhaps.

Rich chocolate and a lesser fruit note in the glass, very comforting but not enlightening or indicative of depth or things to come.

A taste. Which is by any measure is ‘full’ in the mouth, a mountain burst of sweet steeped fruits that is just shy of sugar kill and more towards a bitter, sweet and yet just holding onto a level that dips into a alcohol sourness, lurking away in the background. 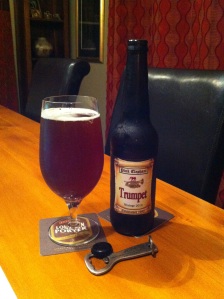 A beer that should be more mild, mellow, measured, perhaps, and yet not quite there, a bit cranky, uneven and feisty. Odd.

A New Zealand Barley Wine, of diminishing  quantity, and availability, I don’t even know that the brewery is still open, I might have just done the equivalent of drawing a mustache on the the mona lisa.

Perhaps that is a bit grand, but this was an 8.5 a lot of beers ago. Since then it’s not got worse.

I love the lazy aroma of fruits and sweetness, I like the way that you get that in the mouthfeel as it swishes around, and I like the longer sweeter sugariness that this leaves to make you twitch your tongue around and find the source of the enjoyment or pain as you are want.

I just like it for the rare beer it is, Go on bite me! Then wish that I could send you some, except or that stupid I can’t send you beer by post nonsense that still exists because, you know, nonsense.

But or all that here are so many many better Barley Wine beers available and that made me both happy and a bit sad.

The pdubyah-o-meter rates this as 8 a of its things from the thing. It’s not rich enough, deep enough, sweet enough nor does it have enough things to keep you occupied. It doesn’t seem to have aged well in the bottle, but who knows what those rules are, I go to the shop, I buy the beer, I drink the beer, It’s been a while, I’m none the wiser. I wish had it had more presence in the mouthfeel, a loudness. It didn’t.

Music:   ” Goldie Lookin’ Chain” their ” Greatest Hits II ” on Spotify   although they are from Wales, don’t hold it against them, these are very funny and on-point poets of the modern ear, except if you live not in the UK or left recently.

This isn’t on the album I’m listening to, but anyway “Guns Don’t Kill People”  or the quite funny ” You’re mothers got a Penis”  are examples.