Epic – Eric the Red. A beer i’ve had on draught out on my travels, and far to good not to try again. A beer that I had on my travels in Wellington, on tap, and loved it. Now for the bottle.

Brewed by Epic Brewing Company (NZ)  in the style that is of an India Pale Ale (IPA) and that  happens in Auckland, New Zealand

Finally Epic adds a Red IPA to the family of hoppy IPA’s. 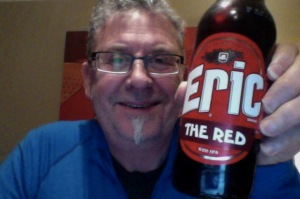 Not Eric, Not in Red.

Potentially, yet unintentionally inspired by the Stone Hammer Series we are releasing in 2016.

There is an obvious Viking connection, but not directly to Thor. We have put a comedic twist on this beer with several references coming from the comedy movie “Erik The Viking”.

Such as the tag line “Oh, Scary, Scary” where Erik thinks he is invisible.

Malty aroma on opening, not surprisingly.

Pour is a deep brown mahogany almost, but more deep ruby red, with an enormous head of the tinged foam, that couldn’t last and settled a little into a more manageable finger or so.

You get a lot more of the hop greenness in the glass, but there is that sweet background as well. Despite all that foam it isn’t a noisy beer. 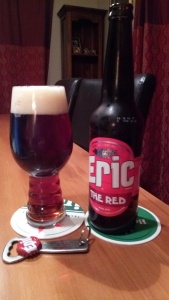 That is a full rich mouthful of beer that is surprisingly bitter on the tongue and dry at the finish, but with a bursting amount of sugary malt middle. I was licking my lips at the end of that first sip. Sip who am I kidding, I meant sup.

Because of all that malt this is a heavier tasting beer, it really works on the taste buds and gives them a going over.

In some respects then this is a bit brash and loud, and over the top, but it is polished and well rounded and it is just in the nature of the style.

Not a beer for the faint of heart this is rather bold and might not work out well as a starter but would be wonderful after some straight up IPA beers (As it was when I had it last) because it would be a tune up.

Music for this:  ” M. Craft” and  “Blood Moon” on Spotify.  Little brother Stewart recommended this to me, and so I’m prepared to listen to all and everything, and he’s usually not wrong.

Martin Craft is a songwriter, producer, and composer who lives and works in Joshua Tree, London, and Berlin