I had this beer as beer #5 way back when, and when I thought it was 9 on the arbitrary scale. I’ve had a few beers since then of course and wonder who this is going to stack up again.

…not a beer meant to be drunk by the gallon…

Brewed by 8 Wired Brewing this is in the style that is  Saison and they are in Warkworth, New Zealand

Saisons have been around for ages. 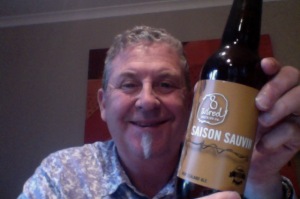 Traditionally brewed by Belgian and French farmers to provide refreshment during harvest. I’m guessing that flavour wasn’t a main concern back then; the priority was to provide a beverage that was safe to drink, because water usually wasn’t. Never the less, over time they developed a beverage chrarissed by beer geeks of the modern world. The alcohol content was low, so the workers could consume enough to keep hydrated and still perform their job: To load the barn with enough barley for next years brewing season. I bet these hardworking, humble farmers never imagined, that centuries later, their style of brewing would inspire brewers from all over the world.

As all our beers, this is a very modern, you might say new world, interpretation of this style. Based on the tradition we have used a French Saison yeast, which provides a plethora of funky, earthy, very “Belgian” flavours. From there we have upped the ante a fair bit by doubling the amount of malt, and thereby the alcohol, and loaded the kettle with punchy Nelson Sauvin hops. Unlike the original, this is not a beer meant to be drunk by the gallon. Moderation is the key for full enjoyment of all great beers.

Earthy grassy aroma that has a hints of sugary sweetness about it on opening, Nice. Familiar.

Lovely pour of a pale straw yellow beer that has a great head of crisp white fluff, which sadly styles but briefly it looked brilliant. 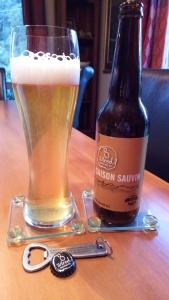 Taste is, again, familiar, and rewarding, slightly earthy and with a bitter undertone that washes over and under finishing with a crispness.  Lovely drinking beer this.

Hard to fault it as a beer of the style really. They really have made something quite nice , and have a for a long time. This is a highly regarded and rated beer on the app places.

Doesn’t take long to drink a beer like this either, the aroma, although earthy, by nature of the yeast bit, is quite nice and the balance and quality of the drink that follows the aroma is really something.

I can see why I liked it then, in a different and more measured way, I’e grown to appreciate flavours and nuance lot more.

The pdubyah-o-meter rates this as 9 of its things from the thing. I was right then I’m right now. Adding more to this has actually added a lot more to this and this is a darn b=good beer of the style that is hard to go past, it’s polished and assurance delivery makes it something above a lot, but also then at the same time in some way makes it less of the style where you might expect some roughness and edgy bits. This is royalty though, class lasts and all that. Chuffed I came back.

Music for this:  ” Magic Trick ” with ” Other Man’s Blues” on Spotify