Rawene Coconut & Vanilla Oatmeal Stout.  Another beer from the locally based Birkenhead Brewing Co. This one a stout, like it says.

Deep brown with a tight cream-like head..Body is voluptuous

I know a thing or two about Voluptuous

Body is voluptuous, with hop flavour and bitterness restrained to ensure drinkability.

Liberal use of both flaked oats and barley provide a velvety mid-palate underling a cacao-like blend of chocolate and roast malts, laced with subtle, warming alcohol. The finish is a lingering blend of Coconut, Vanilla, and Chocolate; inviting just one more sip.

Herb and Spice beer – Oatmeal Stout as the Base Style. Coconut used at various points in the brew and toasted coconut and vanilla pods added to the fermentation

How to describe the familiar  coconut vanilla aroma of a stout, except to say it’s not quite as rich of chocolate as I’ve remembered them being. Like I remember a lot of things.

Dark deep brown mahogany colour, like that wasn’t expected, and try as I might not much of a  head arrived, but what did is dark tinged but not very lasting.  Earthy green hint in the glass, possibly from that coffee, not sweet enough to be from the vanilla, right.

Hight carbonation in this, or a lot of bubbles, that seem to depress and remove a lot of the initial taste that I was expecting, a bit of a burst. This isn’t that. 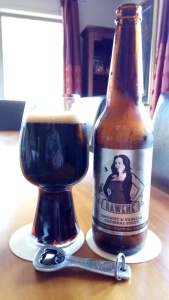 I noticed what I though as being the alcohol tang more than anything else, the anything else being coconut or vanilla, and there was I thinking that the oatmeal added that fullness of mouthfeel which this also doesn’t seem to have in abundance

There is flavour in this, but it’s, to about a point, not full or loud or jumping out and stating it’s claim.

Easy enough to drink and left for a bit to warm and take that cold edge off this becomes a softer and more engaging drink, but it has a long way to go to get to enjoyable (I nearly wrote chewable as a word I was searching for, that thing in a  beer where you have a myriad of flavours in your mouth and enjoy finding them all, or, that state of a beer where it’s just too heavy in one aspect)

I digress though, but that doesn’t get me away from the disappointment.

Needs more, more vanilla, more coconut which might then make it too sweet of course, and more body, so more oatmeal.  Pleasing enough but needs more.

The pdubyah-o-meter rates this as 7 of its things from the thing. I could have been more harsh.  I like a beer that has the beginning, the middle and the end. Sometimes I can bend on that though, but there isn’t enough in this to think you’re having an off day and that the beer you have is better then the day you’re having. You just can’t like every beer.

Music for this: ” Loch Lomond” and ” Pens from Spain ” on Spotify

Loch Lomond is a band based in Portland, Oregon, United States that was started as a solo recording project of Ritchie Young in 2003, they do Chamber pop, Indie rock, and Indie folk !