Schneider Weisse Unser Aventinus (TAP6) – A beer c/- the Beer Jerk NZ beer club and this one is later than usual because a holiday got in the way. You might even notice a difference in the video me and the selfie me, but that might give a bit away about preparation and that.

Deep and complex – for big and relaxing moments by the fire

Brewed by Schneider Weisse G. Schneider & Sohn GmbH in the style that is Weizen Bock  and they do that trick in Kelheim, Germany

The old woolly one has a beer

It has an intensive, typically top-fermented clove-like aroma.

The palate experiences a gentle touch, on the tongue it is very full-bodied, compact and yet fresh with a hint of caramel.

It finishes with a light and delicate taste of bitters leaving behind a strong, smoothly rounded, sour impression.

Oldest wheat doppelbock of Bavaria. Since 1907

That is a full rich and complex aroma on opening, deep rich like chocolate and stone fruit.

Brilliant rich dark ruby and brown pour with a lovely tinged head of some depth and substance, that’s a pretty pretty beer.

Aroma in the glass is deep rich in fruits.

The taste, deep sugary sweetness, full mouth-feel of fluffiness , and a lovely soft bitterness with a lips making finish to it.  It is a big good. Compared to when I last had it it’s brilliant. 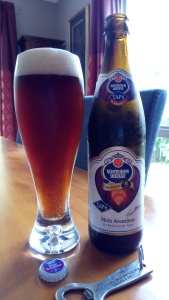 It is however short of being big in the body for me, but then I could be confused about the style, which is possible.

This does  have a lot of the hallmarks of a rich Belgium Strong Ale, rich fruits, sugary notes, and I have to remind myself it’s not one of those.

Also, of note, or not, is the apparent lack of alcohol astringent in this, there isn’t a clue that you’re drinking a beer that is somewhat stronger than usual or expected, and there isn’t much by way of drinking note to guide you in that respect.

It’s easy drinking lovely tasty bee, but one where you could easily be confused on style and then on delivery.

The pdubyah-o-meter rates this as 8 of its things from the thing. That confused about the style thing, that. I’m not sure what to rate it as a Weizen Bock but even my cursory research shows that this must be pretty much on point. But I’m not sure that it’s a beer that clangs the bell as much as it might, having said that though I’d happy go a few because this is a nice bit of beer.

Kings of Leon is an American rock band that formed in Nashville, Tennessee, in 2000.

Strong, dark wheat beers. Weizenbocks typically have a high ester profile, with more malt and alcohol than is typically associated with a wheat beer.