Clown Shoes American Monastic. BeerJerk NZ beer club with another potential outstanding choice. Once a long time ago I had a Clown Shoes beer, and I loved it.

use of the selfie stick,

For Clown Shoes Beer this is Brewed at Ipswich Ale Brewery in the Style that is an Imperial IPA and that was done in Ipswich, Massachusetts  USA 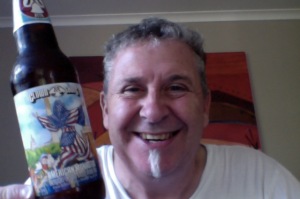 From the right to wear monk robes with stars and stripes, shamelessly eat greasy cheeseburgers and unrestricted use of the selfie stick, this beer represents the freedom to explore America.

So, What could possibly go wrong? A New cap for the cap jar that is dangerously close to full and I might have to rationalise that corks are not caps…..

The yeasty aroma drama is for me that Belgian thing, but this is also intensely aromatic, and sugary.

A magnificent bright hazy orange pour, yes i poured it all, and it delivers a lovely looking thing with a head that suits on the top that is both bright and persistent. 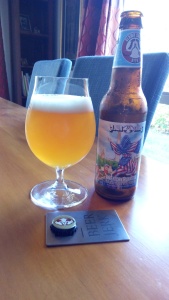 Aroma in the glass is sweet sugary malty with a little peppery catch.  Mango!

Those aromas and looks though are not supported by an overly bitter beer that doesn’t have a softness about it to balance it out.

There’s a lot going on in this, the flavours are all pop-pop-pop.

This is a lovely experience beer, but for me not a her that I’d seek out again or perhaps rave about to friends, not that I don’t think it’s a good beer, it’s just not amazing beer.

The predominance, for me, of that tropical thing, like Mango, is hard to get past, and the bitterness is consistent and doesn’t die away or get overwhelmed.

The pdubyah-o-meter rates this as 8 of its things from the thing. If it was on Aroma and Looks then this is 10, sadly the disappointment of the lack of a softness about this made it quite a harsh beer to drink, a pleasant beer but not exciting enough to go mad over.

Deceptive Bends is the fifth studio album released in 1977 by rock band 10cc.