Behemoth Im-Peach-ment Sour Ale. For someone who says he’s not a fan of the sour beers I seem to drink a lot of them. Perhaps it’s a journey to find closure.  Plus also being Sunday it’s a day for the Vinyl, and really it chose itself…

Brewed by Behemoth Brewing Company this is in the Style that is a Sour/Wild Ale and that happened in Auckland, New Zealand

Peach Sour. Hazy as fuck, uses 200kg of Golden Queen Peaches on top of a Kettle Soured Pale malt and wheat malt base.

Wide-mouth can that can be used to drink from, but I’m going for a glass. Of course.

Opening with a loud crack, the aroma is only that of sour, I can’t discern anything else.

Hazy cloudy pour with a sharp white head, looks really nice in the glass. Aroma there is still just that ‘sour’ note.

Taste is no where near what I was expecting, the sourness in this is low and not unpleasant. 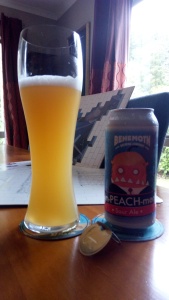 There is also a fair amount of softness and gentleness in the middle providing a lovely cushion.

I quite like this then, it’s refreshing and easy to drink without that fear of puckering every time.  The mustiness in the aroma is always going to  be there, but it’s not distracting.

I’d also say that it probably could go more peaches as nice and soft as this is there isn’t a clear cut peachiness about this.

None of this stopped me drinking and enjoying this in short order though, and I’d probably drink it again if I was offered.

The pdubyah-o-meter rates this as 8 of its things from the thing.

Music for this:  ” Pink Floyd” and “The Wall”  I’m on the Vinyl version you can listen along at Spotify though

The Wall is the eleventh studio album by English rock band Pink Floyd, released as a double album on 30 November 1979