8 Wired Grand Cru 2015.  A beer that might just sure the slower nature of a Sunday afternoon.

aged with currants and cascara

Brewed by 8 Wired Brewing in the style that is of a Sour Red/Brown and they’re based in Warkworth, New Zealand

Aged on currents and cascara in Pinot Noir barrels.

This heady brew is aged with currants and cascara coffee cherries with brettanomyces and pediococcus in pinot noir barrels.

This brew was then added to a red wine foedre for further ageing. The effects are remarkable, leading to red wine heavy flavours of stone fruit, leather and our trademark sour hit. T

his brew will bottle condition with the flavours and aromas developing further over time..

So, What could possibly go wrong? Well it’s developed enough and it’s time to get in.

Rich Pinot red aroma on opening, really big, and you get that sourness too. 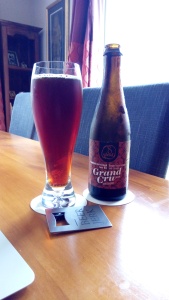 Tried really hard to get this pour with a head and all I got was a top film that didn’t look that appealing. Aroma is that of tannin full red wine.

And to get straight to the chase this is deeply and disappointingly not up to scratch. It’s flat, slightly fizzy red wine without depth. It’s almost but not quite undrinkable.

I was expecting deep richness, a sour balanced by the roughness of the Pinot perhaps, and fruitiness under to keep it all balanced.

In my head that was what was going to happen, and there you have it good on paper not so good in a glass.

The pdubyah-o-meter rates this as 5 of its things from the thin, which I think is generous. This is beer that I know is better than the one I’ve got, because the brewer is just too good. But I can only tell you about the beer I have, and this one is a shocker.

Music for this:  ” Tindersticks ” and ” The Something Rain” on Spotify

A much more mellow album, soul-like tones and pace.

The sour red/brown beers of Flanders can be considered as two different styles, or two ends of a single style continuum, depending on how you choose to view the issue. They are a clearly–defined sour ale subtype, one with strong historical traditions. Their character blends rich malt with tartness, and usually some fruity character as well. Oak aging is common in the traditional production of the style and therefore is often evident in the character. Many examples are also aged on fruit. At the red end of the style, the classic is Rodenbach at the brown end it is Liefmans, and there are several very good examples in between.