Yeastie Boys Bigmouth, the Beer Club beer of the week, and it doesn’t happen often but I thought of the the music straight away, because I’m that unoriginal. Also the oddest local beer I’ve ever had, because this one, although the Yeastie Boys  are New Zealand based, is brewed in the UK and then they’ve only gone and bought some back!

For Yeastie Boys  this one is brewed at BrewDog and it’s in the style that is  Session IPA, Yeastie Boys are based, of course, in Wellington, New Zealand 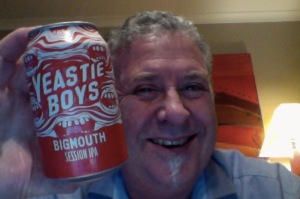 Bigmouth is an extra pale, unfiltered, hoppy session ale with a bold tropical and white wine notes from the Nelson-grown New Zealand hops.

You’ll notice that I’ve chosen the biggest mouth glass I could muster, because I’m that unoriginal.

Tell you two things, one the can wasn’t over full and I didn’t squish suds all over myself, and second that the aroma on opening is lovely grassy hop rough.

Pour is very pale yellow, and I couldn’t muster much of a head, but the aroma in the glass is still amazing. 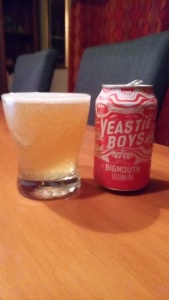 Nice bite in this, but there is a gap to the flavour hit, but it does deliver a bit of dryness at the back, so it’s not altogether unpleasing.

It is bold in places and shy in others is what you can take from this, a beer that promises much from the aroma, and that initial sup that gave a lovely bite, but for me it falls away quite quickly and ends not with a big but a bit of whimper.

You know there are better lower alcohol beers, and the ‘session’ beers generally have to make too much of a compromise to be effective, and this isn’t really that much lower to make it stand out.

However I really am impressed with that aroma, the hoppiness upfront, it’s what happens after that leaves me a bit out of sorts.

The pdubyah-o-meter rates this as 7 of its things from the thing. It’s ok, it has great aroma and a lovely bit of hoppiness about it, but for me it is lacking in middleness. It’s a nice lower alcohol beer, but I don’t see myself getting a few in for a sesh.

Music for this:  ” The Smiths ” with ” The Queen is dead” on Spotify

The term Session IPA describes a category of beers marketed for their hop-dominant flavor profiles at “sessionable” levels of alcohol. While this is typically 3.2 – 4.6 percent alcohol, a few have stretched the definition.