Moa N.Z. Gold Ale  which was brewed in support of the New Zealand Olympic Team for the 2016 Rio Games. Weirdly available recently in the shops, which is either a good or a bad thing. Cok and Cage too, which is a sign that this was brewed on site and not contracted out, not that their contract beer is bad, the Stout is outstanding and White Lager lives in the fridge as a staple. But I look forward to uncaging the beer.

won’t be around for long

With around 162 calories a serve, this is a 375ml bottle, cork and cage sealed beer that is 5.4% ABV, which is about 1.6 standard drinks worth of beer in NZ.

Brewed by Moa Brewing Company, this one in the style that is : Golden Ale/Blond Ale and the one is from Marlborough, New Zealand

We’re obviously pretty bloody thrilled to be a supporter of the New Zealand Olympic team, and seeing as we’re a brewery, we thought we should probably make a beer you could watch The Games and eat hot chips with. So we did and it’s a Golden Ale and it looks like this.

More White than golden at the moment

But we didn’t make a whole lot, so it won’t be around for long, unless no one buys it, in which case it will be around for a while. Go New Zealand!

This golden colour ale is brewed predominantly with Pilsner malts, Vienna and a touch of Wheat, giving a mild malt sweetness. Both late hopped and dry hopped with NZ Motueka to provides an upfront passionfruit and pineapple characters that give way to some pine and lemonade-type citrus flavours.

This beer has a lingering clean after-bitterness with a dry finish, best enjoyed when celebrating a New Zealand Gold!

So excited to open a beer with a cork!, It is a simple pleasure. Probably adds heaps to the cost, but it seems special.

Hoppy enough, but you also can tell that this is at the light end of beers. 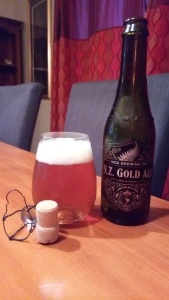 Pour slightly more towards golden than yellow, darker than I was expecting, and in a good run the head is bright white and looks lovely light and persistent in the glass.

Aroma is pretty indistinct. Then after a bit it appears as something that I can only pick as ‘plastic’ which I’m beginning to wonder if it’s one of the op types, like ht Motueka, but I’m not an expert.

This isn’t a beer of outstanding merit, and I don’t think it’s going to be a medal winner.

Bitterness is somewhat insistent and then comes the dry and unexpected finish which just seemed to leap out.

A style of beer that isn’t ever going to much above the everyman level of beer, this is far to safe and conservative a beer, and frankly not a celebratory beer that it could or should have been, which is in and of itself a bid of an odd choice, and perhaps a failed ambush marketing ploy.

Certainly beer that brought more frowns and sighs than it should have.

The pdubyah-o-meter rates this as 7 of its things from the thing. Hard to go past average, which is what I think this is, I’m also no sure that I get along with the hop choices, which would be me more than the beer, but as the consumer and all that I should be taking more care with my purchasing choices. I don’t think this beer offers anything new, unusual, elevated or different from your average run of the mill bulk produced faux-imported beers that are available in dozens.

Music for this:  ” The Bright Road ” and their album ” Ocean ” on spotify

The Bright Road is a band from Montréal. The video isn’t on this album I’m listening to but you get the idea.

There are a few different types of blond ale. The first is the traditional “Canadian Ale”, an adjunct-laden, macrobrewed, top-fermented equivalent of the American Standard. The second is common in US brewpubs – a light starter ale, with marginally more hop and body than a macrobrew, fewer adjuncts, but still not a flavourful beer by any means. The British interpretation is easily the boldest, hoppiest blond ale rendition. Some of these can almost be considered American Pales they are so hopped up – very crisp, refreshing, with relatively low alcohol compared with their North American